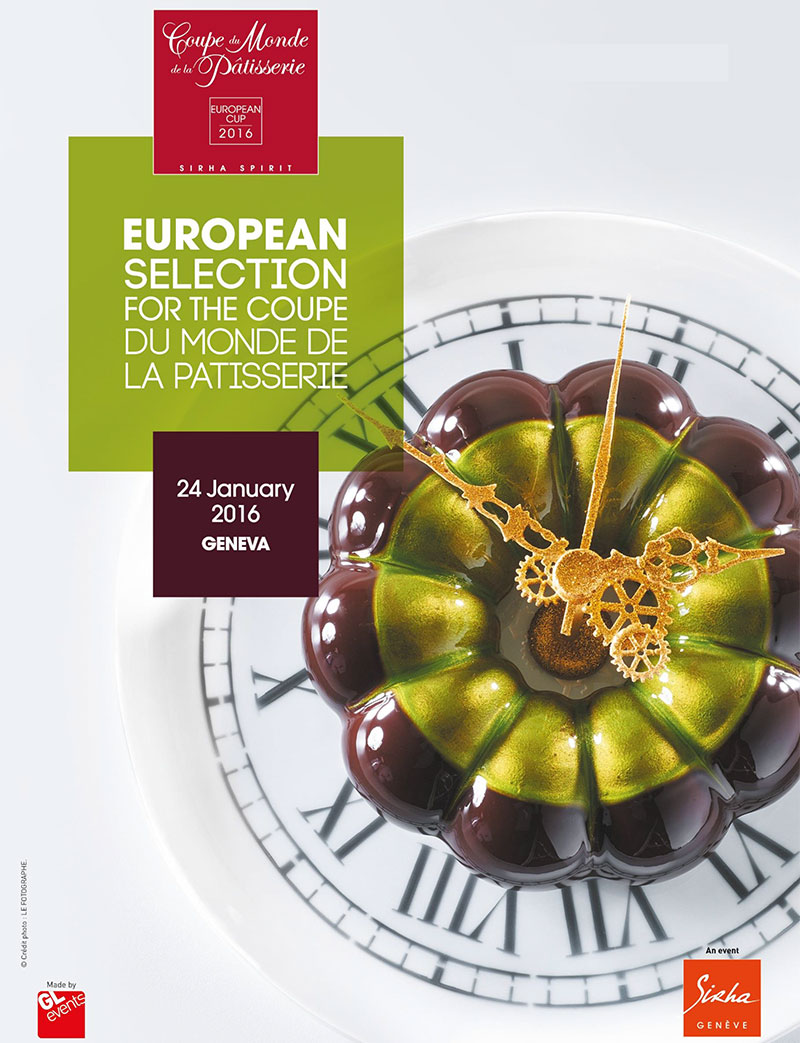 The European Cup will take place during Sirha Genève on 24 January.
‘This second edition of the European Cup will feature a splendid cast with an exceptional mix of culinary cultures and pastry expertise worthy of the international standing of this event that promises to be excellent’, Gabriel Paillasson, President founder of the Coupe du Monde de la Pâtisserie.

‘The contest takes place in Switzerland and the home team are very serious contenders. Belgium and Spain are no newcomers to the event and will endeavour to push its limits even further. All the more because other high-potential teams from Sweden and Denmark for example will muster their best efforts in order to win. And finally, for the first time, emerging countries such as Lebanon and Turkey will be entering the contest. The level will be very tough and the teams will need to pull out all the stops to prove the extent of their talent’, Paillasson explains.
As pastry shows are on all screens, the Coupe Europe – selection round for the Coupe du Monde de la Pâtisserie – makes it mark as the unmissable European event created by the trade for professionals of the trade. This event gather the best talented pastry chefs in the world to showcases the undisputed savoir-faire and techniques of the European continent in the pastry trades.
For its second edition, the prestigious European Cup will take place during Sirha Genève on 24 January, under the aegis of Fabrizio Donatone, member of the Italian team that won the Final of the Coupe du Monde de la Pâtisserie 2015. Beyond its friendly and electric atmosphere the contest showcases the undisputed savoir-faire of the European continent in the pastry trades. It is the most eagerly anticipated selection event ahead of the 2017 final in Lyon.

What he says?
Fabrizio Donatone
President of Honour of the European Cup, Selection event for the Coupe du Monde de la Pâtisserie

‘This is actually the first time that I will officiate as President of a contest. I think it’s a very constructive experience. The Coupe du Monde de la Pâtisserie is the most significant contest for the pastry trade. The teams from the different countries compete against one another not only to win a cup, but also to earn a title that crowns their individual sacrifices and team spirit. Being offered this opportunity to help and judge the teams that will take part in such a deeply meaningful contest is a great honour for me.’
What does the European Cup mean to you?
‘The European Cup is a wonderful event that promotes the spirit of sharing, competitive challenges, and exchanges of ideas between different cultures. The world of contests contributes much to the search and discovery of new techniques and flavours. Thanks to these events, the pastry industry has much to gain, in particular in terms of prestige.’
What is your approach to pastry?
‘For me, pastry involves the alchemy of flavours, aromas and textures. The pastry chef must endeavour to find the perfect balance that will provide intense emotions and pleasure.’
What are the developments in the pastry trade?
‘The pastry trade is constantly changing, in particular through progress in terms of equipment, production methods, increasingly advanced raw materials, and also thanks to research conducted by companies seeking to improve the quality of raw ingredients and materials.’
What is the future of pastry with regards to our eating habits?
‘Pastry should essentially focus on the quest for quality, and as we know quality comes at a price! Unfortunately, this is not in line with today’s notions of consumption and profit. Personally, I would hope to see the emergence of a counter-trend, at least in artisan pastry, that would ensure that pastry can continue to progress on a path toward evermore excellence.’
What is the place of European Pastry in the world?
‘European pastry is undoubtedly the oldest in the world. Many countries have not integrated desserts as part of their culture, or at least not to the extent we see in Europe. In Italy and France, as throughout the rest of Europe, we have many regional specialities of desserts as well as a breakfast culture that are often not found in other regions such as Asia. However, even though some continents don’t eat pastries on a daily basis, they have still developed unique skills and techniques.
This is what makes the ‘Coupe du Monde’ and European Cup truly exceptional. For me, European pastry is the cradle of pastry worldwide.’
What advice do you have for the young generation?
‘Keep on testing and searching: there are still techniques to be discovered, new combinations to be tried etc. Today we have access to raw materials from all over the world, which opens up huge possibilities in terms of creation. I would encourage young pastry chefs to learn to recognise their limits… in order to move beyond them!’

The top 7
The countries that feature in the Top 7 are those that achieved the best performance over the three last editions. These nations are automatically qualified to take part in the final. However, holding a national selection round remains mandatory for these countries.
The countries that compose the TOP 7 for the 2017 cycle are as follows:
> France
> Japan
> United States
> Singapore
> South Korea
> United Kingdom (winner of the previous European Cup, selection of the Coupe du Monde de la Pâtisserie, at Sirha Genève 2014)
> Taiwan
In Europe, France and the United Kingdom are in the TOP 7 and are therefore automatically qualified to enter the final of the Coupe du Monde de la Pâtisserie.
The winner of the Coupe du Monde de la Pâtisserie is not allowed to take part in the following edition of the event, even if they are among the TOP 7 (for example: France, Gold medallist in 2013 did not take part in the 2015 edition). As Italy won the 2015 edition it will not be taking part in the contest in 2017!

Wildcards
Since its creation, the ‘Coupe du Monde de la Pâtisserie’ has always sought to promote new nations on the international pastry scene. As part of this approach, the countries that distinguished themselves in a continental selection event may benefit from a Wildcard, attributed by Gabriel Paillasson.
The European cup: eight countries in the spotlight
In the wake of the respective national rounds, the 2016 edition will feature eight countries as follows:
> Belgium
> Spain
> Denmark
> Sweden
> Lebanon
> Switzerland
> Russia
> Turkey
The event will bring together top pastry nations such as Belgium and Spain that have already won the final in the past and are no newcomers to the Coupe du Monde, as well as more recent yet talented entrants. Switzerland will also be taking part in the European Cup and will endeavour to defend at home the colours of their great pastry culture. A total of 16 exceptional pastry chefs will give their best efforts and talents in an attempt to win a place on the podium.

5 hours are available  to complete the tests 14 pastry creations:
> 2 frozen-fruit desserts
> 10 desserts on a plate including chocolate
> 1 artistic creation made of sugar, and composed of at least 50% of drawn and blown sugar
> 1 artistic creation made of chocolate integrating for the very first time a block of Valrhona dark chocolate sculpted by the contestants (weight and dimensions of dark chocolate block : 23kg, H : 50cm, l : 27,50cm, thickness : 15cm).

The judges rely on a detailed marking grid in order to award points for the tests in several categories: