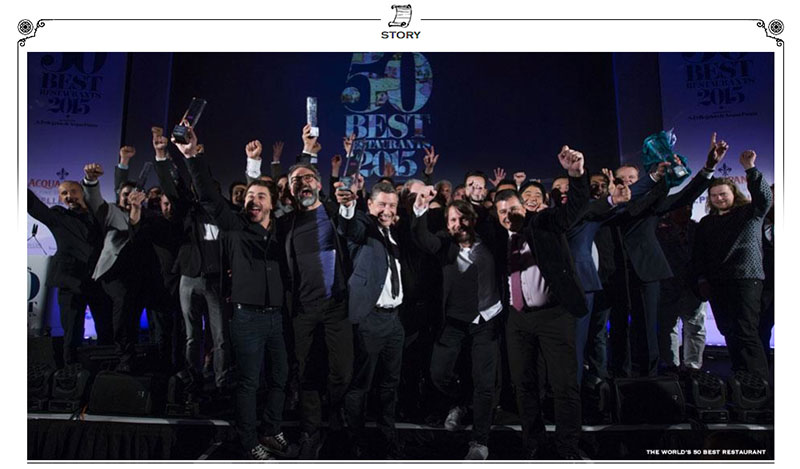 As it was predicted, a night of change is exactly what was delivered on the 2015 edition of the World’s 50 Best Restaurants, sponsored by S.Pellegrino and Acqua Panna.

The Roca Brothers from El Celler De Can Roca in Spain jumped back into the top spot for a second time after dropping to second in 2014, regaining the title as the best restaurant in the world. The energetic Italian chef Massimo Bottura and his Osteria Francescana restaurant in Modena, Italy, is at number two on the list; the happy chef and team climbed one place from third in 2014. Last year’s winner and overall four-time-winner Noma with chef René Redzepi dropped from the number one spot in 2014 to third on the list, though the chef promised outside to reclaim his title at the top.
Virgilio Martinez from the Central restaurant in Peru entered the top 10 for the first time, flying into fourth position. He was followed by Eleven Madison Park in fifth (here is the full list).
Ahead of the big event, French chef Hélène Darroze received the Veuve Clicquot World’s Best Female Chef and New York-based chef Daniel Boulud was honoured as the recipient of the World’s 50 Best Restaurants Lifetime Achievement Award. “One to watch” is Sepia, Sydney (Australia). Albert Adria was awarded as the World’s Best Pastry Chef, while the Chefs’ Choice is Eleven Madison Park restaurant in New York.