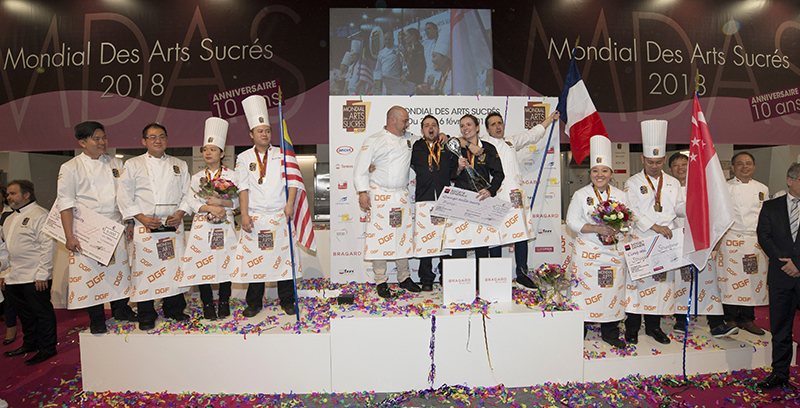 The reportage of Europain in Paris and the photo gallery of  desserts, cakes and entremets winning the Mondial des Arts Sucrés

With a renewed exhibition formula and a sector layout that reflects the daily challenges of production, sales and management, Europain has brought together more than 500 international exhibitors from the bakery and pastry worlds in Hall 6 of the Parc des Expositions in Paris Norde Villepinte. Last February, for four days.
The 22nd edition of the Paris exhibition focused on industry innovations, reserving specific areas for equipment and ingredients, packaging, furniture and digital sales technologies, management solutions and services.
As part of the fair, the Forum hosted interviews, conferences and round tables with 80 French and international contributors, who debated about trends, local productions, agri-ethical bread-making and traceability, ancient and modern varieties of cereals, markets, healthy pastries, gluten-free products, allergens and laboratories of the future, including digital training and successful models for confectioneries-bakeries and confectioneries-cafes.

We had proof of the value of team-work, persistence and passion in an international pastry competition with Sara Accorroni and Bruno D’Angelis, the winners of the Mondial des Arts Sucrés in 2016. At the 10th edition of the competition Parisian, the Italians passed the title to Marie Simon and Loïc Beziat, French, on the podium with the Malaysians Yap Kean Chuan and Hwei Min Lau (seconds) and Carina Tan and Ben Goh of Singapore, third.
Organized by DGF, the Mondial des Arts Sucrés gave a show with a timeout to introduce the official tastings, in the presence of international prominent jurors, with Pierre Hermé as the  Honorary President.

Pascal Niau and Pierre Hermé during the official tasting. 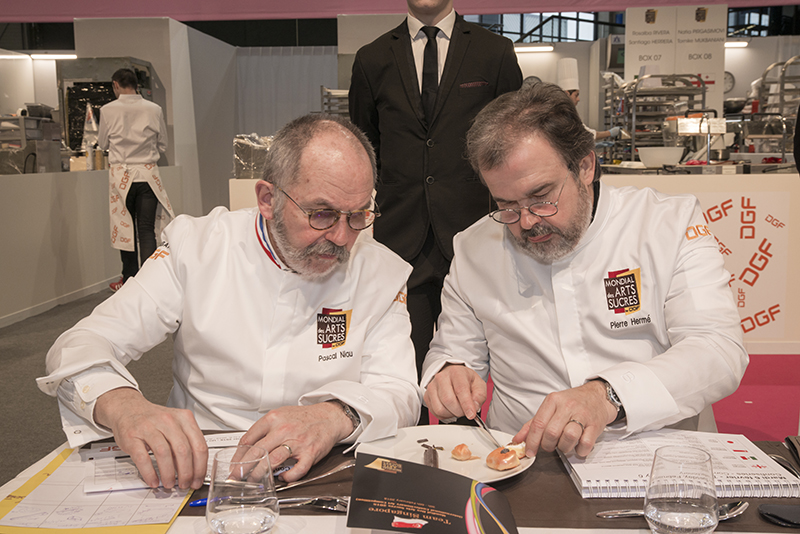 Team spirit and gender equality have characterized the work n the boxes. The two pastry chefs, a man and a woman for each team, shared skills and know-how with the common goal of winning. In 19 hours, the 16 teams in the competition worked on complex preparations such as desserts, small gelato-cakes, entremets, pièce in artistic sugar and chocolate. And with the theme of “French luxury” imposed by the rules , it seemed us clear that the organizers wanted to focus on the aesthetics that characterize the pastry sector, especially in the modern era.
In addition to the flags on the podium, the pastry chefs in the competition represented the countries: Ecuador, Russia, Taiwan, Canada, Venezuela, Morocco, Colombia, Ukraine, Brazil, United States of America, Japan, Mexico, and Georgia.