Team Italy focuses on the last weeks of training for the two competition days in Lyon, on 24th and 25th September 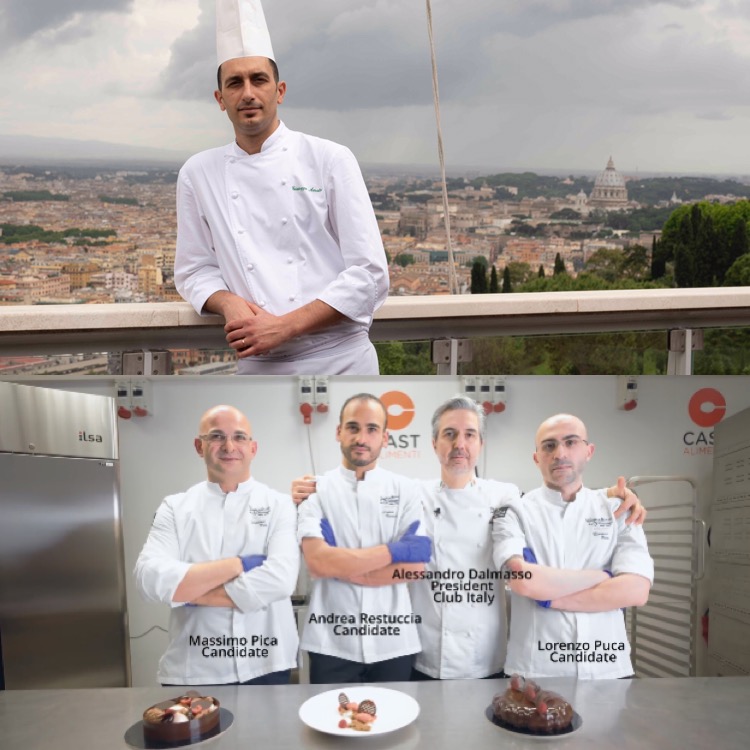 The prestigious presence of the Italian pastry chef Giuseppe Amato in the special jury dedicated to the new restaurant desserts challenge is now official. Together with him, there are four other famous pastry chefs and three world-famous chefs.

Born in Taormina in 1981, since 2005 Giuseppe Amato has been part of the staff of the ***Michelin chef Heinz Beck’s La Pergola at the Hotel Rome Cavalieri, where he is now head pastry chef. In 2017 he joined the Accademia Maestri Pasticceri Italiani and subsequently received the “Domori L’Espresso – I Ristoranti d’Italia 2018 – Le Guide de L’Espresso” award, assigned to the Pergola as the best pastry chef of the year. In 2019 he was elected the best pastry chef in Italy at the Santa Rosa Pastry Cup competition and, in 2020, he was included in the best pastry chefs section of the Gambero Rosso guide. In November 2020, the lucky book written by Amato with Lucilla Cremoni, “La pasticceria da ristorazione contemporanea” by ChiriottiEditori, was published. Since this summer he has been appointed as director of MAG, the Master Academy Antonino Galvagno in Palermo.

About the Team Italy

“The new rules push teams not only to highlight their professionalism and to evaluate their organization, but also to consider management and sustainability. The most important challenge for us is to obtain the best results relating to the new criteria of sustainability and food waste management, thus confirming the greatness of Italian culture”, declared Livia Chiriotti, director of “Pasticceria Internazionale” and promotion manager of the Team Italy, in the interview accompanying the launch of the official video of the Club Coupe du Monde de la Pâtisserie Section Italy, two weeks before the final in Lyon (watch the video HERE).
Team Italy members – Massimo Pica (chocolate), Andrea Restuccia (gelato) and the captain Lorenzo Puca (sugar) – made good use of the pandemic months, dedicating even more time to prepare and refine their creations, in terms of both taste and aesthetics. The three say they are now ready for the spotlights of the most important pastry competition in the world.

The latest updates from Lyon

On the first day of the Coupe, September 24, there will be only 6 nations competing, as China has renounced. After the first round with France, the United Kingdom, Egypt, South Korea, Russia and Japan, it will be the turn of Italy on the second day, 25 September, together with Chile, Algeria, Mexico, Brazil, Switzerland, and Morocco.

A many-year presence at the World Cup

Our Country boasts 12 participations at the Coupe du Monde de la Pâtisserie and a double title of World Champion. “Founded in 2001, the Club Coupe du Monde de la Pâtisserie – Selezione Italia is active in concretely supporting the teams, edition after edition. President Alessandro Dalmasso explains: “as rules and events evolve, one need to start almost from scratch, especially in this edition. Therefore, every time we have to review our style and pursue aesthetic innovation and constant taste improvement not only through research, study, experimentation, but also thanks to the precious support of coaches such as Emmanuele Forcone, Francesco Boccia and Fabrizio Donatone, world champions in 2015”.