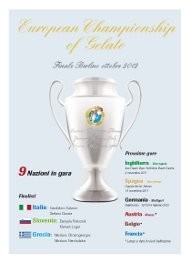 Grand finale, on the next 18th and 19th October, for the European Championship of Gelato, which will take place in Berlin…

European Championship of Gelato is an event that involved in the various National selections a thousand gelato makers across Europe. The final will take place in Berlin – Steigenberger Hotel- and will see the participation of the two top finishers of the eight selections (Italy, Slovenia, Greece, England, Spain, Germany, Austria and the Netherlands).
Finalists will compete producing two flavours: Mango for the fruit gelato, and Chocolate for the cream one.  Participants from each Nation will produce their artisanal gelato in front of a qualified jury, composed by field experts and Food journalists from different countries, in the guise of consumers.
The sum of the scores for the different gelato flavourd will decree the winner team that, over various acknowledgments will win a beautiful Caribbean cruise.
Huge waiting for the couple of gelato makers which will represent Italy: Candelo Calarco, holder of the shop “L’Artigiano” in Barcellona Pozzo di Gotto (Messina) and the youg Stefano Dassie, holder of the shop “Il Gelatiere” in Treviso. These two capable gelato makers have all the intentions to enforce the tradition of a typical Italian product such as the artisanal gelato, but they’ll have to reckon the enthusiasm and professionalism of other colleagues that, in the respective National selections, have already demonstrate their capacity. Main target of the eventi is to promote an healty and genuine product such as artisanal gelato, pride all over the world of the Italian gastronomic tradition.
The European Championship of Gelato is organized by the “Accademia della Gelateria Italiana”, which finds among its ranks some of the holders of the most important and appreciated gelato shops in Italy, in collaboration with the reference magazine “Gelato Artigianale”. www.gelatoartigianale.it