Italy is the winner of the Gelato World Cup at Rimini Fiera’s SIGEP 2016.  Spain came second and Australia third.

13 teams competed, made up of a total of 65 seasoned professionals from Argentina, Australia, Japan, Italy, Morocco, Mexico, Poland, Spain, Switzerland, USA, Chile, Uruguay and Singapore.
The Italian team that won this year’s Gelato World Cup (selected at SIGEP 2015 and trained hard over recent months at Castalimenti), was made up of Luigi Tirabassi (gelato artisan from Subiaco – Rome), Alberto Carretta (chef from Thiene – Vicenza), Antonio Capuano (pastry chef from Riccia Campobasso and team captain) and Amelio Mazzella di Regnella (ice sculptor from – Naples). Team manager was pastry chef Diego Crosara from Altavilla Vicentina (Vicenza).
Before announcing the winning team, in the South Foyer at Rimini Fiera the thirteen teams showed their skill in numerous tests regarding the preparation of a gelato cup with assorted flavours, a gelato cake, and four types of chocolate petit fours with a maximum weight of 40 grams, the preparation of three hot finger foods to be matched with a savoury gelato chosen by each team, an ice sculpture and an  ice baseboard with the inclusion of flowers, fruit, nuts/dried fruit, greens and spices, or other edible ingredients. And, lastly, the new feature of a brittle sculpture.
To put the contestants’ creativity and ability to handle a surprise ingredient to the test, there was also the Mystery box, a trial of ability involving the creation of a cone gelato flavour using ingredients that were only drawn and assigned at the beginning of the contest. 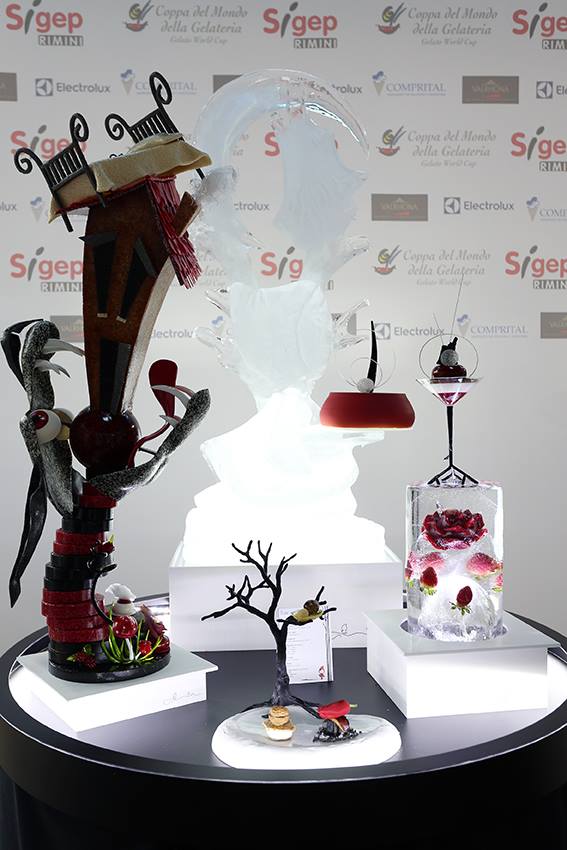