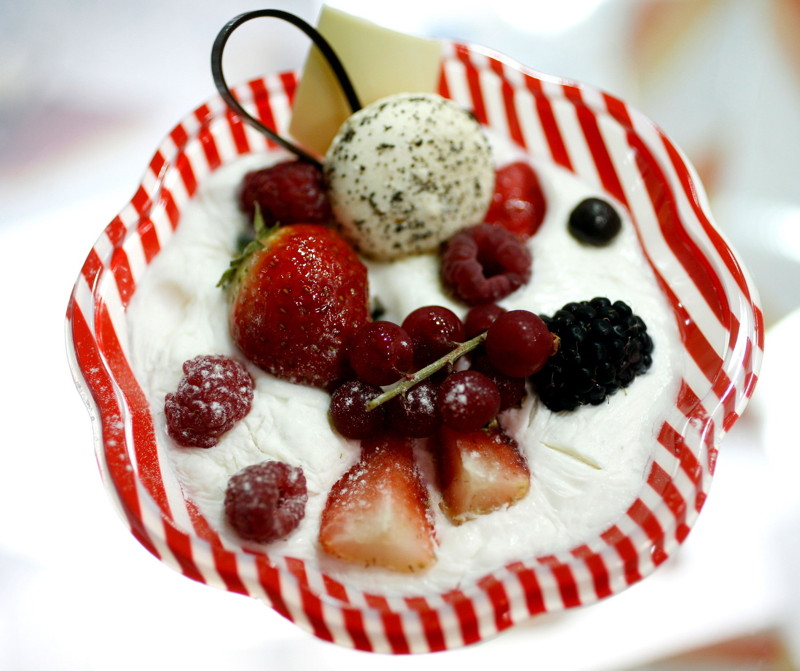 The weather has not helped, but gelato is no longer afraid of anything. On the threshold of the summer, the Observatory of SIGEP (The International Exhibition of Artisan Gelato, Pastry, Confectionery and Bakery production) confirms: classic flavours such as chocolate, pistachio, cream and fruit are still to the fore. However, one new feature is that they are made on a stick, confirming the desire to experiment new formats. There is a great increase in the use of ingredients tolerated by those suffering from celiac disease and Vegans (without sugars, gluten and lactose), but also others based on cheese, vegetables, such as red chicory flavour, or inspired by traditional Italian desserts.

The success of gourmet gelato has taken root, as part of menus, accompanying main courses, such as meat and fish, cold cuts and salads. There is a tendency to propose lunches and dinners, or buffets at parties and corporate meetings, at which gelato embellishes the dishes. Gelato is firmly rooted in Italians’ meals, from breakfast to lunch break, through to aperitifs and dinner, for a complete, nourishing, light and enjoyable meal. Gelato artisan’ creativity runs wild, constantly proposing new flavours to whet palates of all ages and tastes, always starting with high quality raw materials, inherited from Italian tradition or the result of careful selection, with fresh (if possible zero-mile) ingredients: from the milk to the cream, passing through the fruit. However, let’s proceed in an orderly fashion. As every year, in this period, the SIGEP Observatory gives an insight on trends in the consumption of artisan gelato to be found in the warmest months. These trends were presented during the world’s most important expo for artisan confectionery and have now become finished products in Italian gelato shops (the next edition of SIGEP, the 35th, will be held at Rimini Fiera from 18th to 22nd January 2014).

In the meantime, the Festa del gelato a Primavera (spring gelato celebration), an initiative of the Association of Italian Gelato Makers, is under way all over Italy: 1.2 million cards were distributed in schools inviting youngsters to tasting sessions. In Rome alone, 125 gelato shops are involved. An opportunity for an insight comes from chairman Alberto Pica: “The weather has not been on our side so far but, nevertheless, we are confident. Italian gelato shops constantly increase the number of flavours available and, in spite of increases in the cost of raw materials, prices have remained unchanged in the overwhelming majority of the venues. Among the flavours, we notice an increasingly close association between the product and the ingredients, insofar as the Italian-made feature that distinguishes gelato is matched with the flavours, increasingly inspired by Italian products. What is the best flavour you have tasted recently? Definitely “cioccocrok all’amaretto”, a real delight.”

The fact that the gelato market is holding well is confirmed by Giancarlo Timballo, chairman of Cogel/Fipe and the Gelato World Cup, due to be held at the next SIGEP, who announces the figures of new activities opening all over Italy. “In periods of economic structural crisis such as this, many people launch businesses that apparently seem easy to run. Gelato shops are one of these: this has always been considered a safe activity, along with snack bars, pizza parlours and public venues in general, for which it is though that no great professionalism is required. But, be careful: those who start up an enterprise must do so with professional conscientiousness, taking part in the training courses that various companies in the production chain organize. To work well and remain on the market, quality and preparation are necessary.”

But what if consumers want to personally decide their quantity and flavours? There’s self-service gelato. There are several brands on the market and self-service gelato shops are beginning to the spread considerably. Essentially, consumers take their cups and serve themselves to the flavour and quantity they want from the dispenser. There are a great number of flavours: fresh fruit, chocolate, muesli, cereals, hazelnut, etc. There is obviously also gluten-free gelato for those suffering from celiac disease.
And abroad, where Italian-made gelato rules the roost? Gelato has therefore eliminated all frontiers and Italian gelato is a great success.