GELATO WORLD CUP: BIRTH OF THE ITALIAN AND FRENCH CLUBS 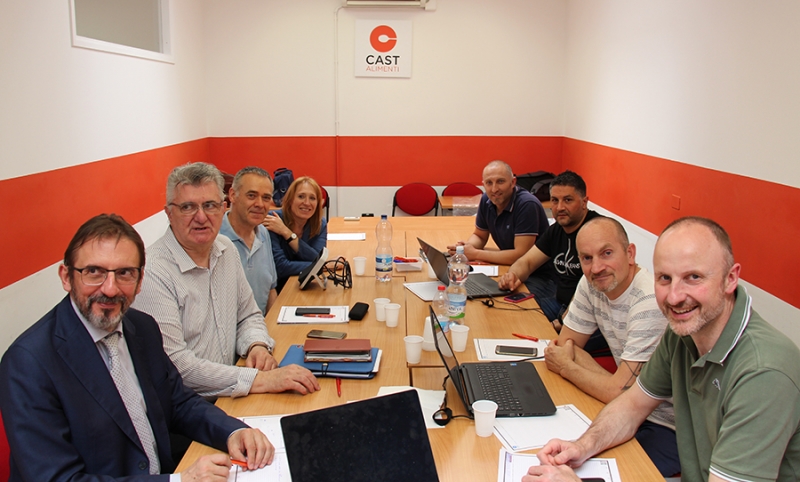 “An important goal has finally been achieved” says Pierpaolo Magni, award-winning gelato and pastry chef, world-champion and newly elected President of Club Italia. On June, the founders met at Cast Alimenti: the President is Pierpaolo Magni, the VP is Amelio Mazzella, and in the group there are Leonardo Ceschin, Antonio Capuano, Luigi Tirabassi, Gaetano Mignano, Stefano Venier, Cesare Puglisi of Editrade and Emanuela Balestrino of  our editor Chiriotti Editori.
“The House of Champions is now ‘reality’,” continues Magni, “we are proud to be Italian and to represent our excellence. We are united to support the champions of today and tomorrow. We will contribute in terms of culture, know-how, experience”. A precious heritage that will make a difference in the long and challenging preparation of the Italian team, represented on the day of the foundation by chef Marco Martinelli. He thanked the founders on behalf of all the team: the gelato chef Eugenio Morrone, the pastry-chef and chocolatier Massimo Carnio, the ice sculptor Ciro Chiummo. Italy will be trained by another World Champion, Beppo Tonon, also called “the gelato esthete” because of his passion for fruit and vegetable carvings.

A few days earlier at the Ecole Valrhona in Tan l’Hermitage, after the selections of the 2020 team, Club France was formed, on the initiative of the late president CNGF (Confédération Nationale des Glaciers de France) Elie Cazaussus. The priority is to support the team which will compete at Coppa del Mondo della Gelateria, starting from the 9th edition, on 19 to 21 January 2020 in the South Hall at IEG Rimini Expo Centre (Italy). The team leader will be Stephane Auge’, Mof and award-winning gelato champion, then France will be represented by Stephane Pecrix of SaintNicolas-Lez-Arras, Yoann Hasselbein, Adrien Lamy and Francois Simon.
Vincent Boue’, Mof 2018, coordinated the inaugural event. Our precious friend Elie Cazaussus wanted it “to frame and support French gelato chefs in national and international competitions”. The Honorary Presidents are Jean-Claud David and Elie Cazassaus, the coordinator Emmanuel Ryon. One-of-a-kind championshave already joined the Club: Cristophe Domange, Remi Montagne, Christophe Bouret, Stephane Auge’, Jean Thomas Schneider, Benoit Charvet and Gerard Cabiron.
“Elie won many competitions – says Stephane Auge’ – he insisted to create a community able to help the teams of the future to be trained at the best and win. Another goal was to collect and share gelato knowledge. The winners of the Bocuse d’Or have a club, so do the winners of the Coupe du Monde de la Patisserie: it was time to create our own. We hope that this will help them to maintain high levels over time, to improve and to grow in our community”.

The Clubs also have the indirect goal of increasing the reputation and the image of gelato chefs to the general public. With their support, the Italian and French teams will give their opponents a hard time in January 2020. President Giancarlo Timballo invites all nations to create support clubs for the teams participating in the most delicious competition in the world. Which will be the next club to come to life?
Fans and gelato-lovers can enjoy real-time updates on the website coppamondogelateria.it/en, on Facebook (the official profile is “Coppa Mondo Gelateria”) and on Instagram (@gelatoworldcup). The hashtag confirmed for the next edition is #CMG2020.