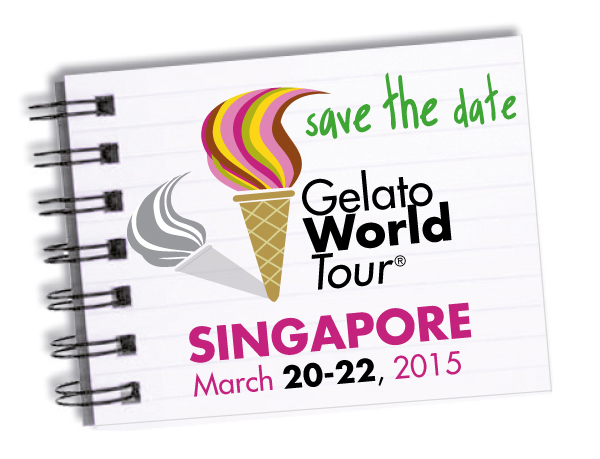 GELATO WORLD TOUR 2.0
THE SECOND EDITION WILL START IN SINGAPORE

Record requests for participation from Australia for the first stage:
16 gelato artisans in Asia / Pacific in the race for the title of World’s Best Gelato

In just 60 days, the second edition of the Gelato World Tour will start in Singapore, that will become the Gelato Capital of the World for three consecutive days. This extraordinary event will celebrate the fifty years of the Singapore’s Republic in the coolest way. On March 20-22, 2015, inside the Marina Bay Sands, the “Formula One of Gelato” will pit new and seasoned gelato artisans of Asia pacific region against each other in the quest to win the title “World’s Best Gelato”.  After the victory of Australia in the 2013-14 Gelato World Tour by artisan John Crowl (Cow and the Moon Gelateria, Sydney with the flavor Almond Affogato), there has been a huge interest in competing by other gelato artisans from the region of Oceania.

This stage will open the spotlight on plans for the next three years. After Singapore, the Gelato World Tour will travel next to Tokyo’s Komazawa Park in September 2015. The Organizing Committee is staging more stops in international cities whose governments are interested in supporting this cultural event. Those cities include Shanghai, New York, Las Vegas, Chicago , Sao Paulo, London and Monaco of Bavaria.

The first Gelato World Tour international competition, which finished in September 2014, covered 5 continents, spreading the culture of artisan gelato. The numbers around the globe were impressive: 700,000 consumers visited the events, over 43,000 kg of gelato were produced, 360,000 cups and 576,000 mini cones were served, international media outlets attended and generated advertising value of more than € 7 million.

The Gelato World Tour 2.0, supported by the Ministry of Foreign Affairs, is directed by the prestigious Carpigiani Gelato University, along Sigep – Rimini Fiera, host of the most important exhibition in the field of traditional gelato and confectionery. Continuing their support of this tour is IFI, international leader in the manufacturing of display cases for gelaterias. New to Gelato World Tour 2.0, PreGel, the largest European company producing gelato mixes, ingredients and pastry products. Also Prodea Group joins as operating partner addressing both the operational management of the tour and international sponsor coordination.

In other big news, the competition will host an exclusive Gelato Charity Dinner,  an unprecedented event in Asia in which gelato will be the undisputed star from appetizer to dessert. Proceeds from the dinner as well as the profits from samples of Gelato at Marina Bay Sands, will be donated to charity.  The Singaporean Felicitas Global has been named Project Manager of the Singapore’s stage.

The “Formula One” of gelato The President of the Jury Selection Stage in Singapore is Pang Kok Keong, Chef and founder of Sugar Daddy Group which delighted patrons with its sweet creations from the kitchens of the Ritz Carlton Millenia Singapore and Hilton Hotel. Since 2002 Pang has been part of the Singapore National Culinary Team.  In 2005 he captained the World Pastry Cup in Lyon and won the Asian Pastry Cup twice… in 2008 and 2010. The Jury Selection will include matching of key players in Asia and the unstoppable Luciana Polliotti, journalist, scholar of the history of gelato and gastronomy and curator of the historical Gelato Museum Carpigiani. The names of the members of the Technical Jury will be revealed in the next weeks.

To follow the stages of Gelato World Tour  www.gelatoworldtour.com 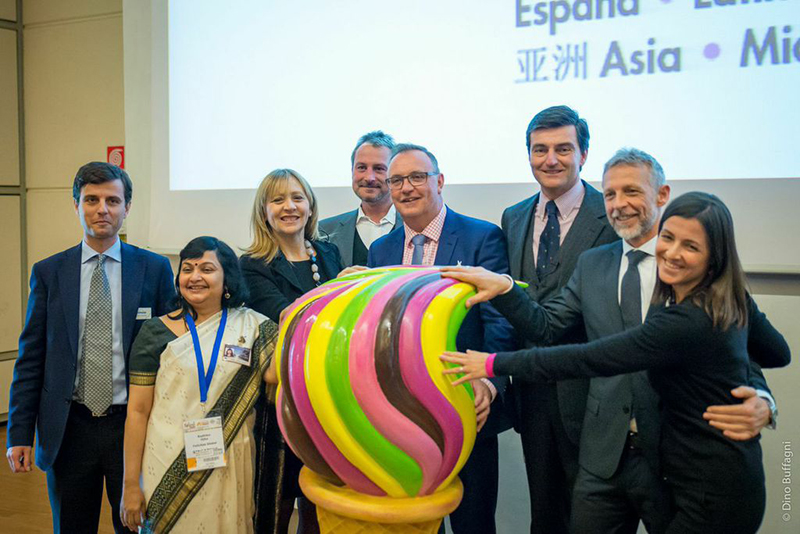