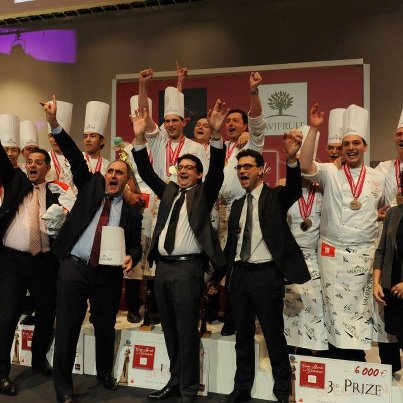 France won the 13th annual edition of the World Pastry Cup. Pastry chefs in 22 teams from 5 continents clashed in an amazing atmosphere in which they had to design and prepare three entries (sugar, ice & chocolate). After 10 hours of competition, France received the trophy to the applause of the crowds. Quentin Bailly, Mathieu Blandin & Joffrey Lafontaine received the most prestigious trophy in the pastry world, but also the gold medal and a cheque of 21 000€. Daisuke Tomita, Koh Moriyama & Tetsuro Asaki (Japan) won the silver medal and a cheque of 12 000€. Francesco Boccia, Lucca Cantarin & Marcello Boccia (ITALY) won the bronze medal and a cheque of 6 000€.

The France team has distinguished itself from the other 21 teams in a unbridled atmosphere. Every team, made of a chocolate maker, a pastry chef and a ice-cream maker had 10 hours to achieved:

The candidates competed with talent and creativity under the watchful eye of the jury members, 22 competitor countries and a special jury chaired by Jacques Charrette (President of the International Jury), Jordi Bordas (President of Honour).