Great success for the opening of the Carpigiani Gelato Museum

On September 29th 2012, in Anzola Emilia (Bologna), the inauguration of the first museum dedicated to the history, culture, and technology of artisan gelato… 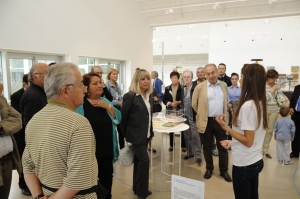 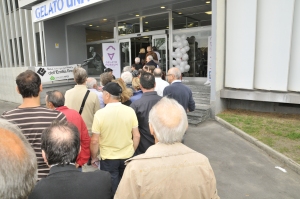 “The Carpigiani Foundation has made a great dream come true: a “home” for the history of gelato that allows operators to understand their roots and origins and the public to discover how such a fine food could be conceived, cultivated, and developed” (Luciana Polliotti).

Anzola dell’Emilia, September 27th 2012 –On September 29th 2012 the Carpigiani Gelato Museum will open to the public. The museum is an innovative structure dedicated to the study, documentation, and dissemination of the history, values, and culture of artisan gelato, a fresh, high-quality food that represents Italian excellence and creativity throughout the world. The opening will be followed by two more days of inaugural activities including guided tours, workshops for children, gelato tasting, and many other delicious surprises.
“The objective of the Carpigiani Gelato Museum is to become a point of reference for the sector, to highlight the roots and history of this quality food and the gelato artisans that produce it, bringing excellence, creativity, and flavor to customers worldwide,” explains Romano Verardi, President of the Bruto and Poerio Carpigiani Foundation. “I want to thank all the people who made the museum possible: the architects Matteo Caravatti and Chiara Gugliotta, the curators Luciana Polliotti and Andrea Barbieri, the donors, the supporters, and all those who volunteered their efforts. To obtain this result it was fundamental to cooperate and innovate as a team.” Verardi further observed, “We are pleased that this initiative came together just a short time after the official establishment of the European Gelato Day (March 24). We join hands in proudly recognizing this achievement with the ArtGlace Association, which worked hard to obtain this recognition from the European government.”

The 1000 square meter museum space has been carved out of the current Carpigiani headquarters. The complex is built around a central garden that connects the various areas of the building including showrooms and the Carpigiani Gelato Museum itself.
According to the architects and curators, “From its origins to today, the museum features an interactive tour that highlights three principal themes regarding gelato: the evolution of gelato over time, the history of production technology, and the places and means of consuming gelato. More than 20 original machines will find a new home in the Carpigiani Gelato Museum, along with multimedia presentations, 10,000 historical images and documents, precious accessories and tools of the trade from ages past, video interviews, and workshops.”
“The Gelato Museum fulfills the dream of our founders, Bruto and Poerio Carpigiani, the two Bolognese brothers who made it their job to spread gelato technology, culture, and business throughout the world,” says Andrea Cocchi, General Manager of the Carpigiani Group. “We are proud that the museum is opening only a few months after the institution of the Foundation. The challenge is now to reaffirm the historical memory of our roots so as to strengthen our future, leading us to progress, innovate, and expand our culture.”
The museum hosts a wide range of objects and machines that illustrate the history of gelato. Further, conscious of the fundamental role attributed by UNESCO to intangibles like knowledge and experience, the museum has gathered a number of audio-visual testimonies from people who have played a key role in gelato history. The museum is a place of tradition, memory, and identity, where gelato can be experienced as an important part of European food culture. It highlights artisan gelato’s roots and sheds light on the history of artisan gelato and the artisans that developed it and promoted it on a global scale, to the point where today it is recognized by UNESCO as part of humanity’s world heritage as a healthy source of nutrition. The museum underlines the technological evolution of gelato machines over time, for the most part Made in Italy and focused on innovation in food safety and producing a product that is particularly indicated for health and good nutrition.
Information and reservations: www.gelatomuseum.com

Bruto and Poerio Carpigiani Foundation
To mark the one hundredth anniversary of the birth of Poerio Carpigiani – founder of the company Carpigiani along with his brother Bruto to sell the famous Autogelatiera, invented by Bruto, and today recognized as one of the 34 fundamental inventions of the 20th century – in 2011 the Bruto and Poerio Carpigiani Foundation was established. The mission of the foundation is to globally promote the culture of gelato, an Italian food that has a long and illustrious culinary tradition. Its objectives? Safeguard the know-how involved in creating high-quality, artisan products that represent the excellence and creativity of Italy. Study and advance the development and knowledge of food culture, promoting foods having precious nutritional and sociological values. Support the education of how to study and protect artisan food heritage, so as to preserve its characteristics and uniqueness. Follow the progress of technological development that increases gelato safety and hygiene. www.fondazionecarpigiani.it
Bruto Carpigiani (1903-1945), engineer and designer, the “legend,” the founder, the father of an entire generation of Bologna packaging designers, engineers, and entrepreneurs. He is the inventor of innovations and prototypes like the Z wheel. In his free time he developed a new gelato machine that was more hygienic, fast, and efficient than the models that were currently available. The machine hit the market only a few months before Bruto died, in 1945. The following year, his brother Poerio founded Carpigiani, a company which enjoyed aggressive growth starting in the 1960s thanks to the diffusion of Italian gelato culture throughout the world. Today the company is the world’s top producer of Italian artisan gelato machines.
Poerio Carpigiani (1911-1982) was the prime mover behind the worldwide diffusion of artisan gelato culture and business. In 1969, after having acquired Cattabriga, the company that since 1927 had owned the patent on automatic batch freezers, Poerio moved Carpigiani headquarters from the center of Bologna to Anzola dell’Emilia. The company experienced rapid, global growth in those years, establishing subsidiaries throughout Europe both through acquisitions and opening new offices. Poerio’s vision of spreading gelato culture globally continues today.