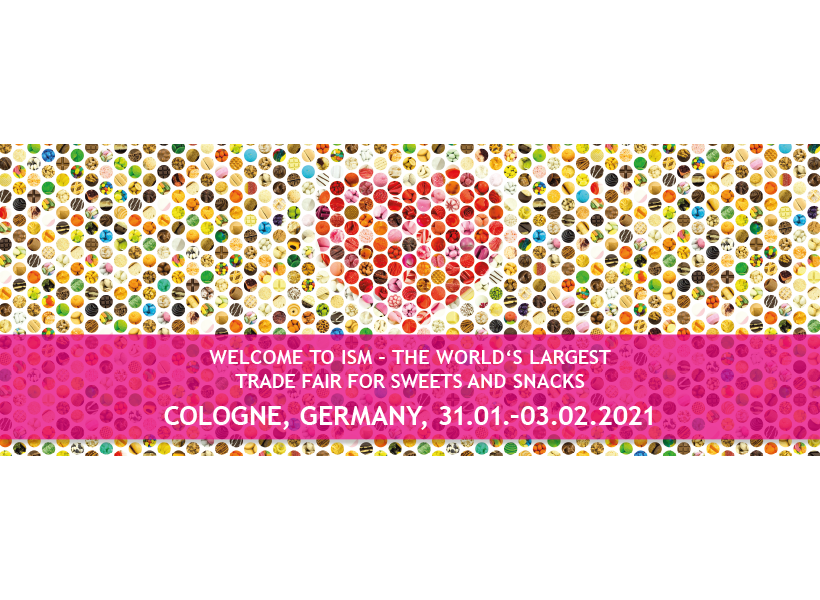 The top associations of the German industry are backing ISM and ProSweets Cologne: In their capacity as a business meeting point, trend or innovation platform both trade fairs have key importance for the sweets and snacks industry particularly in these challenging times. With regards to the upcoming trade fairs, Koelnmesse will continue to attentively watch the current developments of the Corona pandemic in Europe and Germany and is constantly engaged in a close exchange with its industry partners

In this way, the International Sweets and Biscuits Fair Task Force (AISM) of ISM explicitly stressed on 5 November 2020 how important it is to allow the trade fair to take place in 2021 as well – even in a reduced format and with a focused selection of exhibitors. The organisers of ISM and ProSweets Cologne as well as the AISM are thus still in favour of a physical edition of the trade fair on-site in Cologne: Both trade fairs are to be organised as a re-start edition and are to bundle their unique synergies even further. ProSweets Cologne will accordingly continue to be organised as an independent trade fair and will share a hall with ISM exhibitors in 2021. The strengths of the platform are thus also once again proving themselves in the current situation and ProSweets Cologne exhibitors will find themselves in a hall community with their customers from ISM. As already communicated, both trade fairs will be organised in a hybrid form and will be expediently complemented by the digital platform Matchmaking365+.
“Special times require special measures with the aim of enabling both our exhibitors and visitors of ISM and ProSweets Cologne a safe and efficient as possible trade fair visit. Against the background of the current challenges and the related travel restrictions, we already know now that the trade fairs will not take place in their customary dimensions. The number of applications received for ISM is still very promising and reflects the interest of the majority of the exhibitors for the trade fair to also be staged in 2021. ProSweets Cologne has indeed recorded a strong decline in the number of exhibitors, but through the synergies with ISM still offers potential for both exhibitors and visitors. This is why together with the advisory board we have decided to bundle the spectrum of offers of the two trade fairs in the halls of ISM in the coming year and stage the two trade fairs as a re-start edition with a modified hall structure. This enables us on the one hand to exploit the synergies of both trade fairs even further and on the other to present the industry themes to our visitors in a more concentrated and focused manner,” explained Oliver Frese, Executive Director and Chief Operating Officer of Koelnmesse.
As the industry sponsor, the International Sweets and Biscuits Fair Task Force (AISM) is also in favour of this approach: “The industry is completely backing ISM and ProSweets Cologne as the most important international marketplace of the sweets and snacks industry. In these times we can certainly only expect a very concentrated offer at both trade fairs and a limited flow of visitors. Nevertheless, we are convinced that we can cause a spirit of optimism with ISM and ProSweets Cologne 2021 and set a positive signal within the industry that trade fairs are possible under these conditions. The extensive hygiene and protection concept of Koelnmesse – #B-SAFE4business – which is unique in this comprehensive form contributes towards this. Furthermore, Koelnmesse’s Corona-compatible complete stand packages facilitate the preparation for the exhibitors and reduce the financial risk,” explained Bastian Fassin, Chairman of the AISM.
The industry sponsors of ProSweets Cologne, the Sweets Global Network e.V. (SG), the Federal Association of the German Sweets Industry e.V. (BDSI), the DLG e.V. and the Central College of the German Sweets Industry e.V. (ZDS) are also backing the conduction of the trade fairs and are supporting the further planning.

Modified hall structure
The restart edition of the ISM 2021 will be staged in Hall 4.2., together with the European country pavilions. Hall 5.2 will accommodate among others the Trend Snacks Area, the start-ups, the new “Finest creations – hand-crafted” speciality trade area and the trend areas “Sweet Trends by Innova Market Insights” and the Expert Stage. Halls 11.1 and 11.2 are planned for further exhibitors of the ISM and ProSweets Cologne will this year be found in Hall 10.2 together with the world’s leading trade fair for sweets and snacks. A separate food service area will also be set up in Hall 3.1.