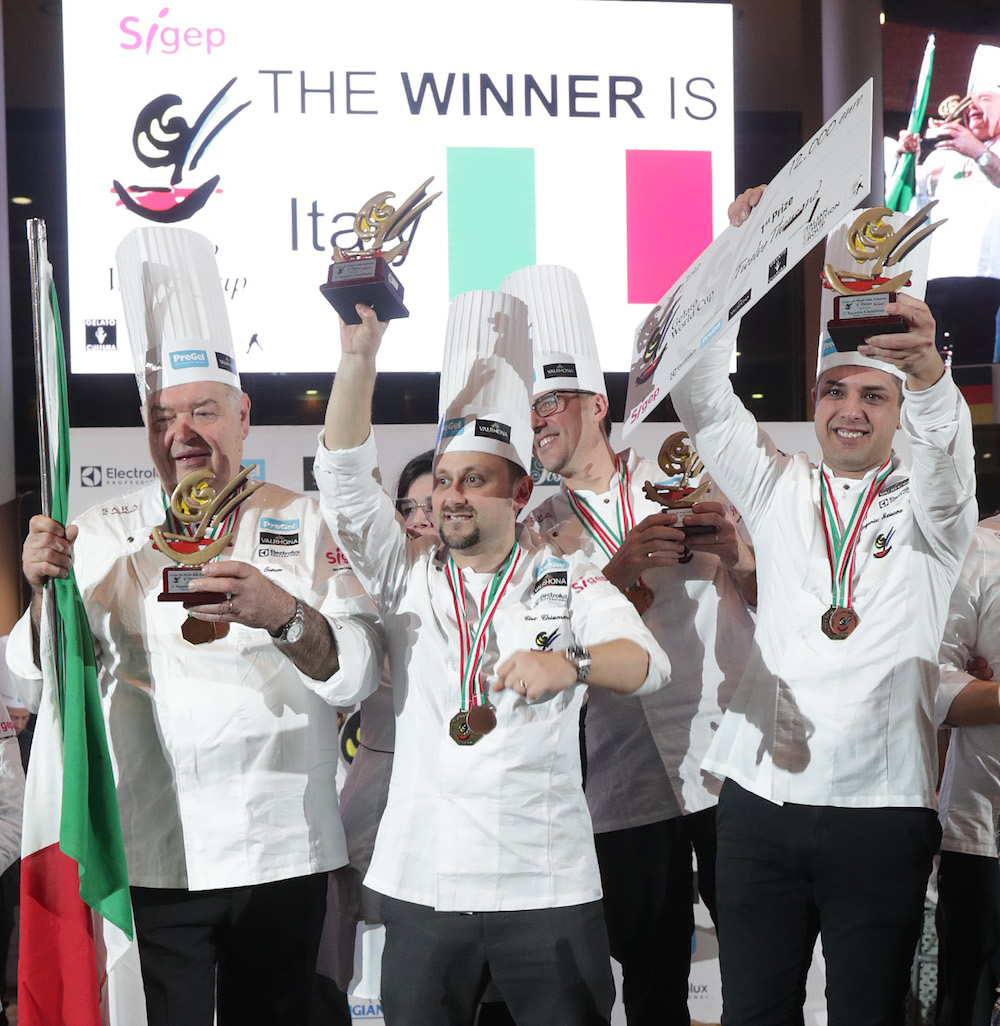 Italy gets the Gold Medal at the 9th Coppa del Mondo of Gelateria, which just ended at the arena in the South Hall of Rimini Expo Center,
during the 41st International Trade Show of Artisan Gelato, Pastry, Bakery and the Coffee World

The team has been led by Giuseppe Tonon and composed by Marco Martinelli, Eugenio Morrone, Massimo Carnio and Ciro Chiummo. Italy selected the theme “Secrets of the forest” and got the highest ranking. The Silver Medal goes to Japan, who chose the theme “The flower of music”. The team was led by Kanjiro Mochizuki and composed by Naoki Matsuo, Kenichi Matsunaga, Kengo Akabame and Hiromi Nishikawa. The Bronze Medal goes to Argentina. The team, led by Maximiliano Cesar Maccarrone and composed by Diego Agustin Irato, Pablo Nicolas Renes, Matias Dragun and Ruben Darre, selected the theme Pirates of Caribbean.

The other 4 special awards go to…

Best Ice Sculpture – JAPAN (the ice sculptor is Kengo Akabame)
Best Gelato Cake – ITALY (An award assigned by the international press jury)
Most Innovative Mystery Box Flavour – ARGENTINA (this award – assigned by the technical jury considering the voting marks – refers to the gelato/sorbet created during the Mystery Box trial).
Outstanding Final Grand Buffet – ITALY (An award assigned by the artistic jury that refers to aesthetics and creative vision)
Carlo Pozzi Award – JAPAN (The Order and Cleanliness award, dedicated to the Gelato Master Carlo Pozzi, has been awarded by the Competition Commissioners to the team that kept the work-station at the best)

12 technical judges: the 12 team leaders (even if Hungary decided to withdraw, Renata Somogyi voted)  and Pier Paolo Magni as President of the Jury. On the field we will see three experienced technical commissioners: Sergio Colalucci, Sergio Dondoli and Gaetano Mignano.

Each team included a gelato chef, a pastry chef, a chef de cuisine and an ice sculptor. The 12 team leaders judged 8 race tests in 3 days (glass single-portion, mystery box, gelato-cake, entrée of haute cuisine, ice- and brittle- sculptures and the new trend of gelato-snacks, in addition to the final Grand Buffet, which is the presentation of all the creations). The students of Istituto Alberghiero Sigismondo Pandolfo Malatesta (Rimini) supported the champions during the race.

The 10th edition of Coppa del Mondo of Gelateria will take place in 2022. The very first international selection will take place at the Asian Gelato Cup, on 3-4 March 2020 during FoodHotel&Asia Show (Singapore Expo). The guidelines for the organization of the selections will be available  at www.coppamondogelateria.it