This Saturday 21st, the announcement of the victory of Japan, represented by Moe Takahashi, Naritoshi Suzuka, Yusaku Shibata, closes the 18th edition of the Pastry World Cup during Sirha Lyon 2023. France and Italy complete the podium, respectively 2nd and 3rd. 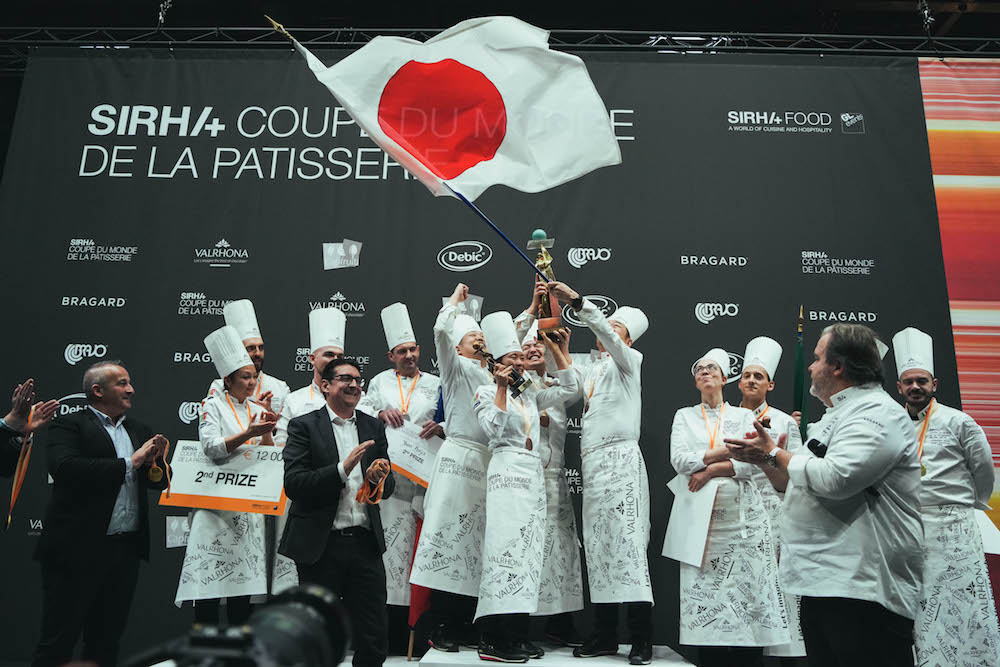 This Saturday 21st of January, 2023, the announcement of the victory of Japan – represented by Moe Takahashi, Naritoshi Suzuka, Yusaku Shibata – closes the 18th edition of the Pastry World Cup during Sirha Lyon 2023.
France and Italy complete the podium, respectively 2nd and 3rd.
For 10 hours, the 17 teams, each composed of a chocolate maker, a sugar expert and a master ice and gelato maker, fulfilled the task of making 42 tasting desserts and 3 artistic pieces on the theme of climate change.
Pierre Hermé, president of the contest, Cédric Grolet, honorary president of this edition, as well as the entire jury, were seduced by the creations of the Japanese team, and their work based on the climate change theme of the Pastry World Cup. The members of the jury also rewarded the team spirit as well as their antiwaste choice.

“The level of the competition rises from one edition to the next, as evidenced by the very close results – attests Hermé -. It is with great emotion that we award Japan, a country accustomed to the podium, which is back on the top 16 years after its last victory”.
“All the candidates were very passionate, which is satisfying for me as a pastry chef,” ads Grolet. “I would like to thank all the people who worked here, for having helped me rediscover this wonderful profession, which benefits of every-day evolution in terms of visual and technical approach”.
After the second place achieved in the last 5 editions, the team composed of Moe Takashi, Naritoshi Suzuka and Yusaku Shibata allowed Japan to win this year, obtaining their first gold medal since 2007 and to add a third world cup to their list of achievements.

The French team – composed of Georges Kousanas, Jérémy Massing and Jana Lai – was once again on the podium during this 18th edition. A vice-champion title that rewards the excellent work done by the team during the events.

After having won 3 gold medals, Italy once again gets a place on the podium. This 3rd place was all the most symbolic as the ice candidate, Martina Brachetti, was the first Italian woman to be selected for this role at the World Pastry Cup.

Ready for Expo Sweet in Warsaw

The Italian team flies to Lyon