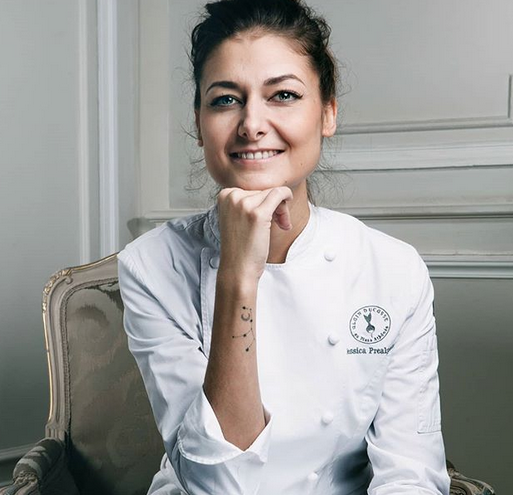 Jessica Préalpato is the winner of The World’s Best Pastry Chef 2019, sponsored by Sosa

The World’s 50 Best Restaurants awards Jessica Préalpato as the new Best Pastry Chef 2019.
Pastry chef at Parisian restaurant Alain Ducasse au Plaza Athénée, Préalpato was born in in Mont de Marsan in southwest France, into a dynasty of pastry chefs. Growing up surrounded by the abundant natural produce of Les Landes and at the apron strings of her parents in the kitchen, she developed a love for desserts.
When she joined the team at Alain Ducasse au Plaza Athénée as pastry chef in 2015, Préalpato found inspiration in Ducasse and chef de cuisine Romain Meder’s natural culinary philosophy, reviewing and adapting her style to complement the restaurant’s overall ethos.
Préalpato now develops creations that take simple French ingredients and highlights their flavours, striving to find a pure way to express their natural qualities.

Her pastry is defined with the neologism desseralité, the combination of desserts and naturalité, to underline how the principle of Ducasse can also be applied to dessert. Her creations, with a minimalist character and rich in fruit, express the natural qualities of the ingredients. For example, citrus fruits are accompanied by an airy version of teurgoule (Normandy rice pudding), while fresh strawberries are served with soy milk.

She moved to Biarritz to study the culinary arts. Her career began at La Chèvre d’Or on the French Riviera with Michelin-starred chef Philippe Labbé, soon leading her to work with other acclaimed cooks, such as Philippe Etchebest at L’Hostellerie de Plaisance and the Ibarboure brothers at Les Frères Ibarboure in Bidart. Moving to Paris in 2010, Préalpato was part of the team that led the opening of Fréderic Vardon’s 39V restaurant in the French capital, where she stayed to become a sous chef at the Park Hyatt Paris Vendôme. A job as chef pâtissière for the Corfou Group between 2012 and 2015 gave her the chance to travel across France and the world, expanding her knowledge and expertise in the culinary sphere.

“Desseralité” is a collection of 45 creations where nature takes its place into dessert. This book contains all the recipes created by Jessica Préalpato since she arrived at the Plaza Athénée in November 2015. As the title indicates, this book answers, in the universe of dessert, to the naturalness that inspires the kitchen of the restaurant.
This collection of recipes also suggests a new reflection on the pastry chef profession. Jessica Préalpato rejects codes and habits. “She takes the idea of ​​’cooked’ dessert seriously and, like a cook, does not hesitate to trust her senses to judge the good cooking of the preparation or the right proportion of the ingredient. It is much more than a technical attitude: it is the logical consequence of respect for the product. In fact, nature never gives exactly the same consistency to two rhubarb leaves or the same two-apple sweetness “, Alain Ducasse explained.