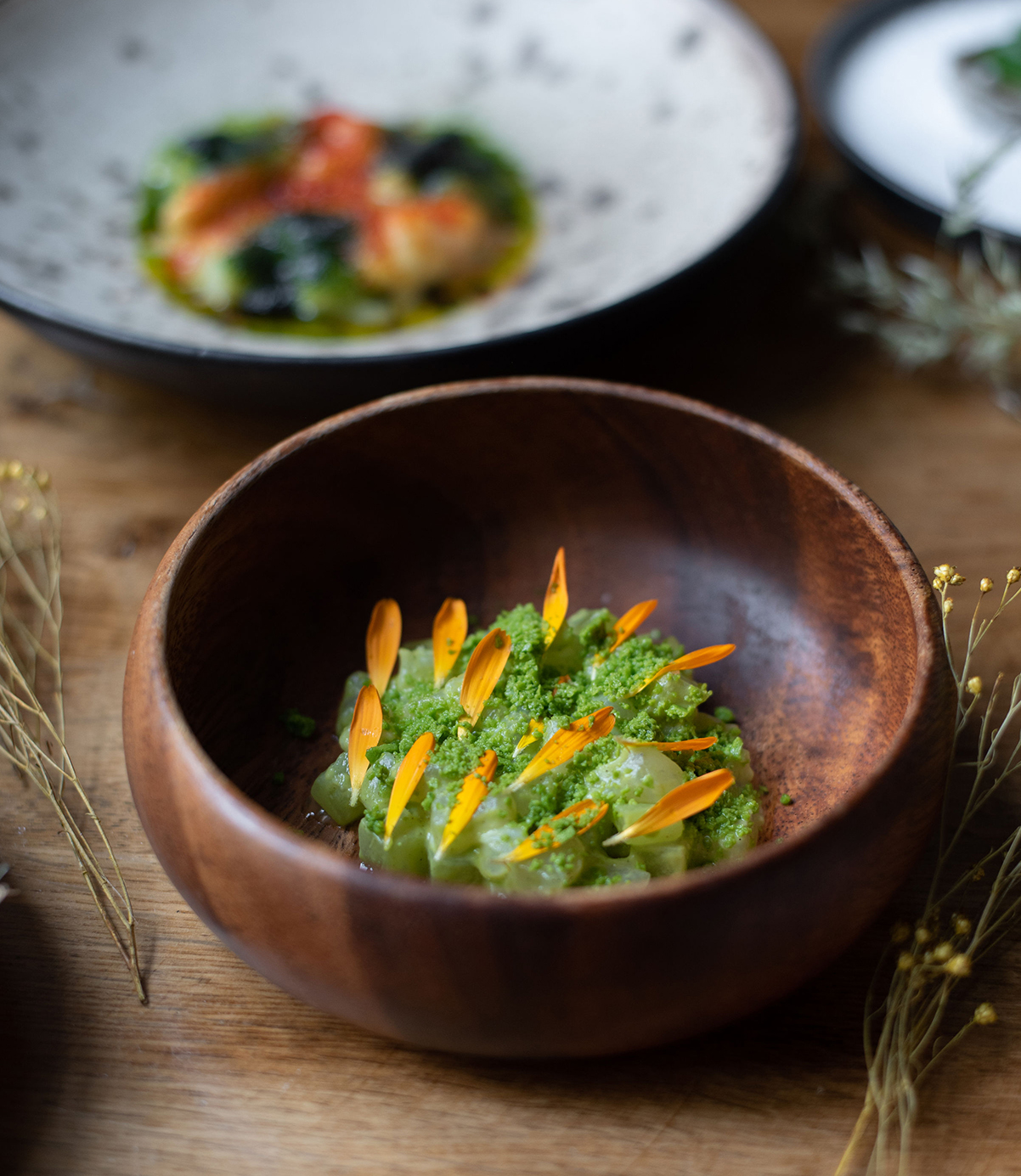 Growing up in Northern Italy, in a town called Malonno in the Lombardy region. Nicola was introduced to cooking from a young age. Influenced by time spent with his grandparents in the countryside, Nicola took over most of the family cooking at the age of seven. With parents who worked long hours running the family supermarket Nicola enjoyed taking charge of the kitchen realm, he found that he could make everyone happy through cooking – it was a moment convivial togetherness.
Much of his holidays were spent with his grandparents who lived just outside the town “we lived in a small valley surrounded by mountains and a lot of nature” Nicola described. Here is grandparents made everything for themselves – from cured meats to cheeses. This had a huge impact on his outlook on produce “on Sunday we would get up at 6am and forage for berries and mushrooms, and the afternoons were spent pickling them. When I saw this approach later, cooking in Copenhagen kitchens, it reminded me of my childhood and felt so natural and familiar”. In the evening his grandparents would grill meat over a fire, teaching Nicola how to control the heat of a flame.
It is this approach to food, hands on and with a short chain between source and plate, that is ingrained in Brace. And, the flavours from Nicola’s Italy have made it into Brace’s menus – pine, juniper, wild herbs, wood sorel – “simple but strong flavours”. From the age of 14 Nicola spent his summers working in restaurant kitchens and at the age of 18 was working at two Michelin starred restaurant Miramonti l’Altro in northern Italy. In 2011 he was researching different approaches to food and decided that the New Nordic approach was one that fit his overall ethos; he moved to Copenhagen and worked at Era Ora, Noma and Quadri before opening Brace.
The community amongst Copenhagen restaurants is one that Nicola finds inspiring and stimulating. “The level of gastronomy is incredible, it’s diversity and community feel. We share ideas and can be inspired by each other. I will happily share recipes, such as my gnocchi to another restaurant.” The creativity means that Nicola feels there isn’t competition as people create their own work, instead they get to be in a supportive and thriving industry.
The idea of continuing to push boundaries and collaborative inspiration is what drives Nicola. The pursuit of creating food and a business that is kind to the environment and reflective of the people involved is at the heart of his cooking.

Brace is a restaurant built on the personality of the owners Nicola Fanetti and UrsulaWaltemath; their joint history and their present location – Nicola’s Italian influence of boldflavours and the Copenhagen sensibility of balance and simplicity.The word ‘brace’ means charcoal in Italian and references construction in English, and so therestaurant acts as base and a foundation to grow and develop from. It first opened in 2017and through Nicola’s cuisine guests see a reflection of the Danish countryside as he cooksthrough the eight micro-seasons, whilst incorporating Italian techniques and approaches tothe produce.Dishes have a minimalistic approach, allowing each component to be showcased at its bestand most flavourful; with a focus on vegetables and fish, plus wild game in the autumn andwinter. The team works closely with local, organic farmers and the kitchen has a strong ethosof valuing ingredients in their entirety, such as weaving leftovers from one dish into a stockfor another. This attention on the links between sourcing and valuing the whole productmeans the kitchen is close to zero waste, including the use of plastic and lack of packaging.The creativity behind the dishes comes from a place of research and a look back intoNicola’s heritage. He takes inspiration from memories of cooking with his grandparents,Italian culture, and the many restaurants he has been an integral part of. The dishes arenever a replication but rather an exploration “the range of food in Italy his huge, it has a bighistory – from the Romans and the connections with other countries, and the spice routeleading to Asia and back”. Nicola allows stories behind his dishes to lead and take centrestage, for example the history of carbonara is linked to Italian coal miners, with the idea thatit was a filling dish to keep the workers going. At Brace, Nicola serves his“carbonara”in adelicate tartlet of rice dough, Danish guanciale, an aged Danish cheese (havgus), an eggyolk sabayon and dusted with burned hay ask powder as a nod to the dish’s history.By combining modern techniques and local produce Nicola and his team get to find ways tobring food history and culture into the everyday, as well as looking to create a new culinarylanguage. Key dishes include the celeriac gnocchi, which is a dish with no food waste – skinfrom the celeriac is made into a stock, the shells of the fresh wild Danish hazelnuts arelacto-fermented which is used to give acidity to the hazelnut cream in the dish and theceleriac tops are dried and made into a thin powered to give a freshness to the finisheddish.The grilled quail dish is also key in demonstrating Nicola’s approach to cooking andflavours.Served without cutlery the guest eats this dish with their hands, which encourages them toeat every last bit of meat off the bones – nothing is wasted. The quail is topped with a blackgarlic glaze and lemon thyme leaves, served with a spoon of quail offal paté with tartraspberry powder.
In demonstration of simple yet bold flavours, the linguine with saffron sauce, Fjordshrimps and santoreggia leaves allows the produce to shine through whilst also having adistinct flavour profile.The restaurant was designed by Ursula and driven by the desire to make guests feel athome. The idea of nature, with warm woods and tactile ceramics, accentuates this feelingof relaxed comfort. The dining room marries the idea of fine Italian artistry throughcolours and design accents such as stuccoVeneziano, and a rustic Nordic simplicity withsoft lighting and a concrete finish to the walls and floor.The style of service is engaging, with many dishes finished at the table – a nod to Italiantraditions of conviviality, sharing and togetherness around food where dishes are notpresented as finished items, something that is not often found in fine-dining. The winelist is a collaboration between Nicola and restaurant sommelier Felix Chamorro, with afocus on small producers and organic and biodynamic wines; the list leans towards moreclassical flavour profiles but with interesting selections.

Signature Carbonara snack. ⁠Homemade tartlet⁠, cream of local havgus cheese⁠, danish pancetta ⁠, and marinated egg yolk foam.⁠
⁠Inspired by the history of the carbonara, where coal miners ate the pasta with their hands full of coal dust, we have finished off ours with powder of hay ash. 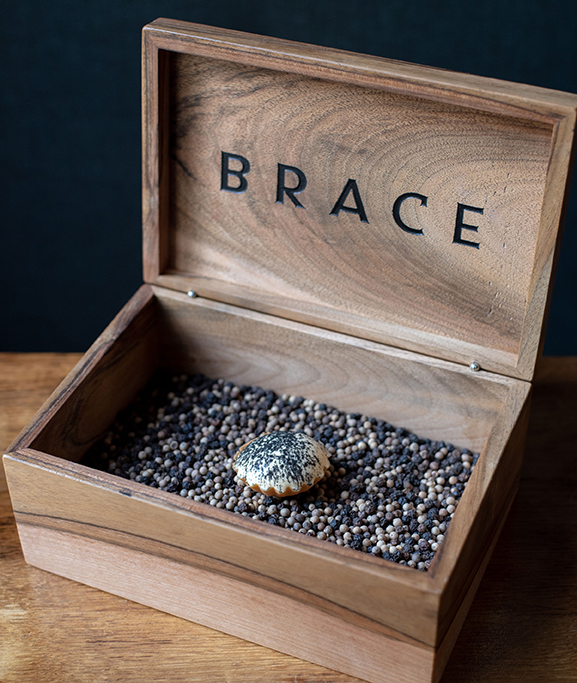 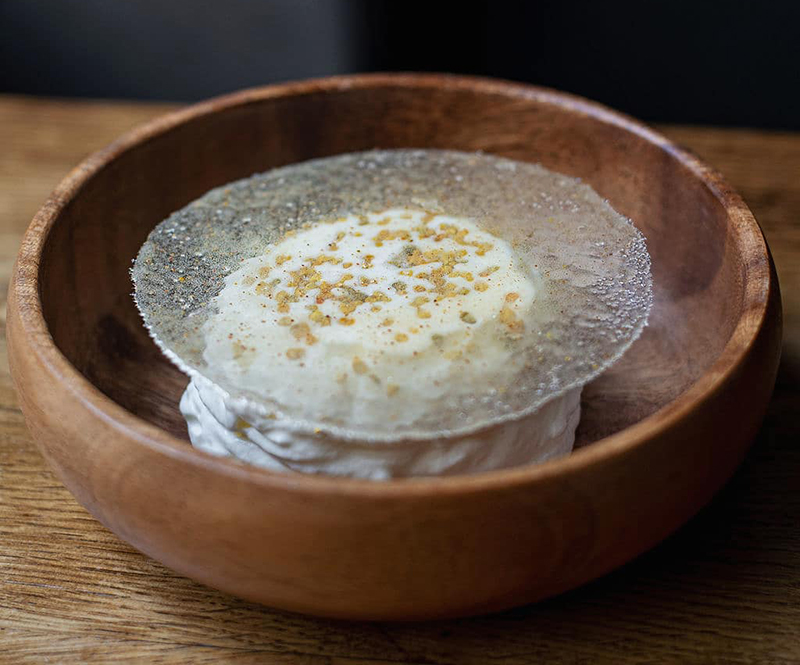 Inspired by the Italian bruschetta. Meringue (made with tomato water), jam of Mirabelle plums, ramson capers, and lemon Verbena. 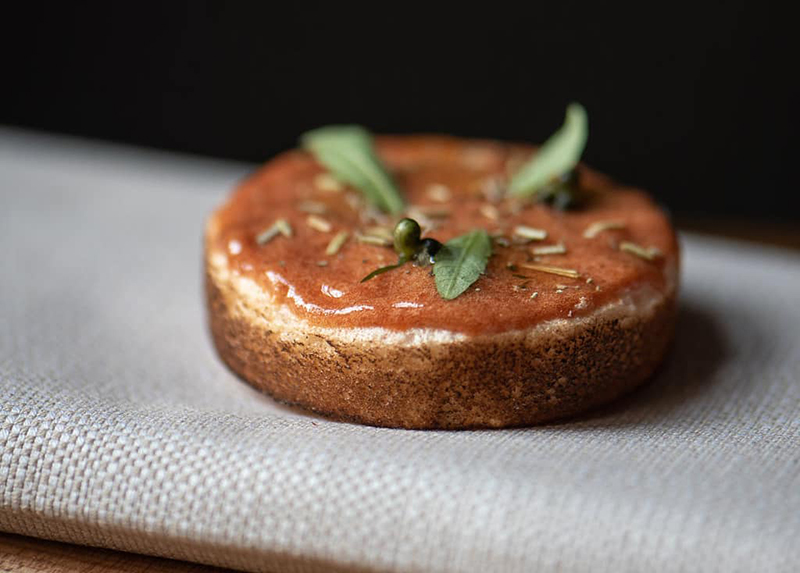 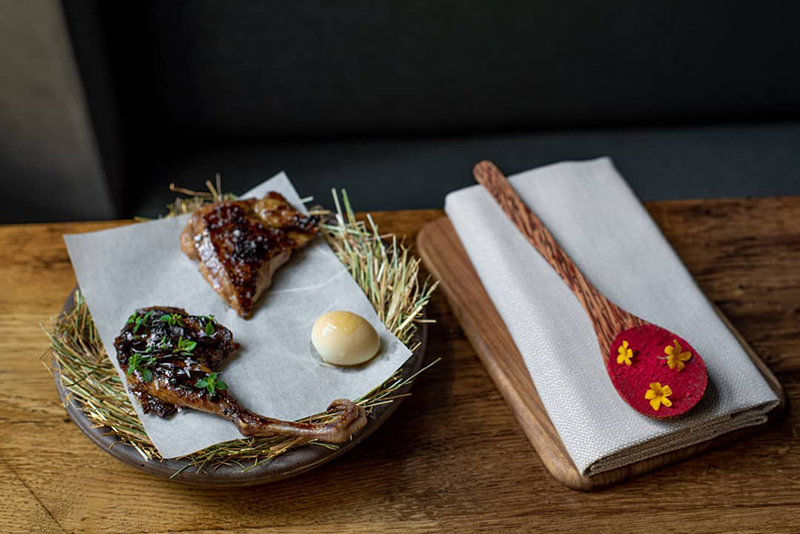 Articolo precedente
ITALY, JAPAN AND ARGENTINA WIN THE 9TH GELATO WORLD CUP
Articolo successivo
Love is in the air… with Hermé and Bamberger