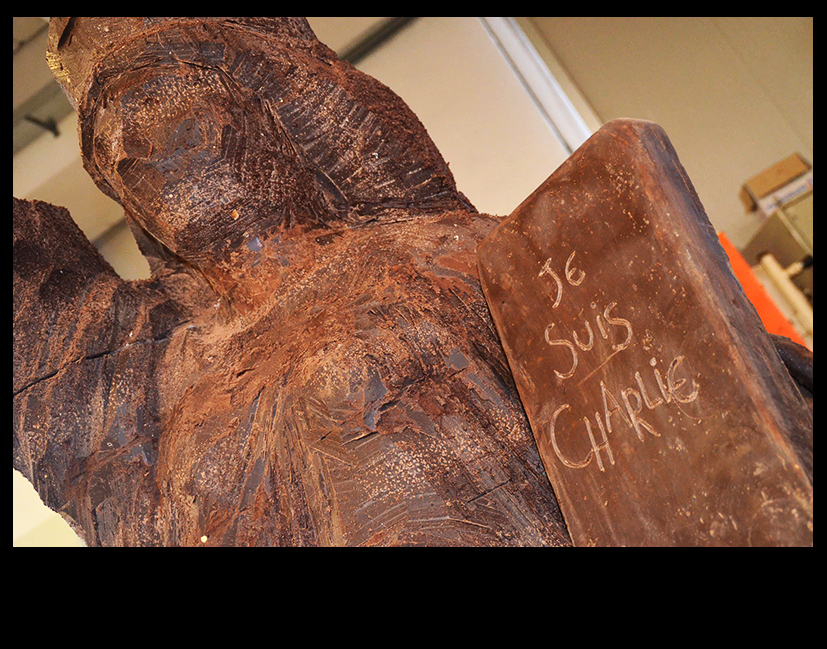 “JE SUIS CHARLIE”:
AT SIGEP THE ACCADEMIA DEI CIOCCOLATIERI ITALIANI IS DEDICATING A STATUE OF LIBERTY MADE ENTIRELY IN CHOCOLATE (2.5 METRES HIGH, WEIGHING 1,500 KG) TO THE VICTIMS IN PARIS
The work, now being built, will be finished on Monday 19th January at the world’s leading artisan confectionery expo,
then it will be at EXPO 2015 and lastly will go to the USA.
“Je suis Charlie” will be sculpted on the book in the famous statue’s left hand

“Je suis Charlie” is the message on the book held in the left hand of the large Statue of Liberty, made entirely in chocolate, that will be realized at the 36th SIGEP, being held at Rimini Fiera from 17th to 21st January 2015.
While the statue was being built, the tragic events in Paris also struck the Accademia Maestri Cioccolatieri Italiani, directed by Mirco Della Vecchia, who decided to dedicate the work to all those who feel part of the fight against terrorism.
The chocolate statue, now under construction, will be at SIGEP on Monday 19 January in The Chocolate Show area (Hall A7), where it will be finished by the Accademia’s chocolatiers. 2.5 metres high, it will weigh 1,500 kg. The chocolate used to build it was obtained by melting production scrap which could not have been sold or re-used.
The work will also bear witness to one of the values of Italian-made products: artisan gelato. For this reason, instead of the torch, the lady with the long toga will hold a gelato cone in blown glass made by Murano master glassworkers.
After the debut at SIGEP, the chocolate Statue of Liberty will be at EXPO 2015, where it will be on show for six months in the hall dedicated to cacao. Lastly, thanks agreements already made, on 31st October it will board a plane to be taken to Washington, where it will be donated to the President of the United States, Barack Obama.

Mirco Della Vecchia, chairman of CNA Alimentare and master chocolatier, at SIGEP has been the key player of exceptional initiatives, included in the Guinness Book of Records. Along with his staff, in 2011 he made the world’s largest gelato cone (280 cm high and holding 70 kg of gelato) and the following year set another record, with a Guinness-size chocolate, weighing 802 kg.
Along with him, once again, there will be Paolo Moro, a famous sculptor who began with wood sculptures and is now known worldwide for having sculpted all kinds of material. 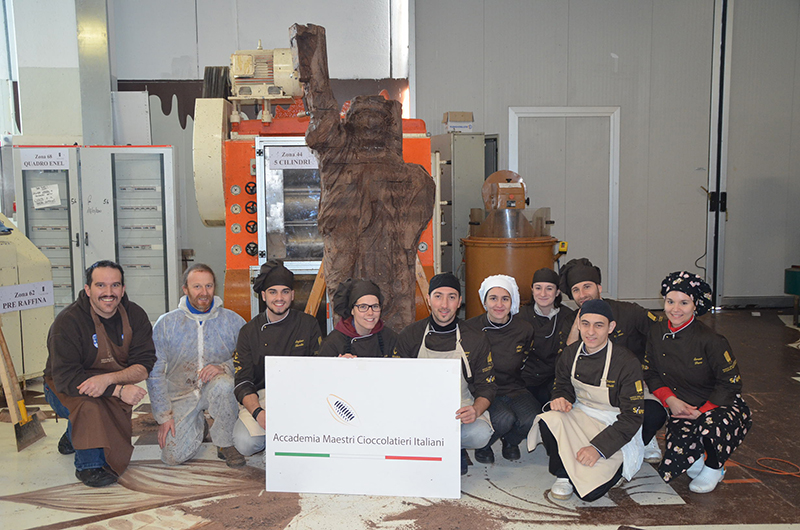 The team, led by Mirco Della Vecchia (first on the left) at work, and a detail of the preparation.