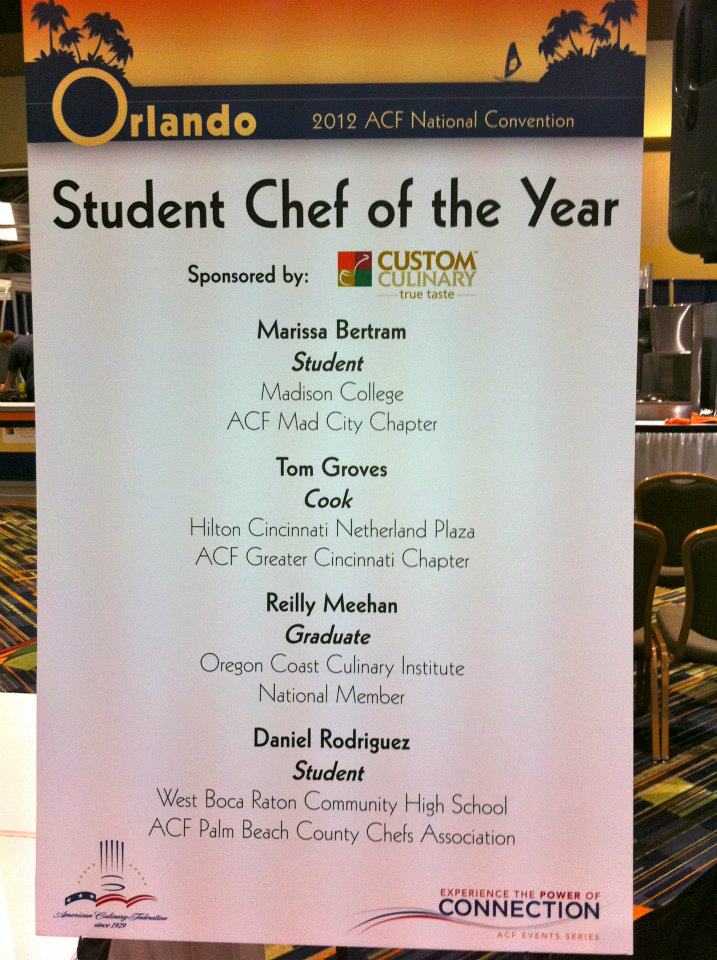 The American Culinary Federation Inc. (ACF) named Scott Ryan, CEC, USA’s Professional Chef of the Year at the 2012 national convention. Reilly Meehan was named Student Chef of the Year. The annual four-day show honoring chefs, culinary industry professionals and foodservice establishments concluded Tuesday, at the Orlando World Center Marriott. According to ACF show officials, more than 1,000 chefs, cooks, students and foodservice professionals attended the annual event and featured more than 100 exhibitors. The annual national competitions highlighted the show, allowing professional and student chefs to demonstrate their culinary skills and leadership. The competition’s MC and honorary judge was Rene Marquis, AAC Military Regional Military Director, due to his longstanding relationship with the organization and long list of accreditations: CEC, CCE, CCA, AAC. “This is the best way to learn the industry. This is a competition, it is direct impact and you get immediate results. I really feel this whole show and convention should be completely enrolled around this competition because it’s the best part.” Marquis said. The premise for the Chef of the Year competition includes a four-course meal. They had one hour to cook and then an hour to plate all of the courses. This year the item that had to be used in all four-courses was a flat iron steak.
“They produced very nice plates. Some of them tasted better than they looked and some didn’t taste as good as they looked,” Marquis said. For pictures and live video of the competitions, please visit our Facebook page. Winner Scott Ryan took home $5,000 and a championship title good until next year. Ryan is from Chesterland, Ohio and is the executive chef at The Country Club in Pepper Pike, Ohio.
The 2013 ACF National Convention will take place at The Cosmopolitan of Las Vegas, July 22–25, 2013.