SIGEP: A SHOWCASE OF EVENTS! 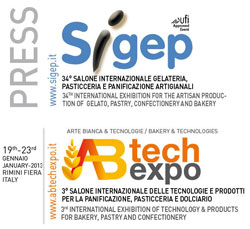 From SIGEP Academy to the Tonda Challenge, all the appointments of the 2013 artisan confectionery Expo…

SIGEP, the International Exhibition of Artisan Gelato, Pastry, Confectionery and Bakery production, will be at Rimini Fiera from 19th to 23rd January 2013 – a huge showcase and stage for the various events, each aimed at highlighting the world of artisan gelato and the high professionalism of all its key players.

SIGEP ACADEMY, the world´s largest school for artisan confectionery. This year, SIGEP will host more than 250 training events, from those organized on exhibitors´ stands to those during the various forums. For further details, information on the events organized on the stands can be consulted by following this link http://www.sigep.it/appuntamenti_eventi/eventi_stand_espo.asp

VISSANI´S RECIPES
Another eagerly awaited event in the area dedicated to gelato (on Sunday 20th – Hall A5 – stand 90) features the participation of the famous chef Gianfranco Vissani, owner of the ´Casa Vissani´ Restaurant and well-known TV personality, as well as testimonial for Staff Ice System. Gianfranco Vissani will present some exclusive recipes that will be prepared on the stand. Visitors will be able to take part freely in the event.

Tonda Challenge
Gelato makers are invited to compete, by showing their ability to prepare the best gelato cup. The challenge will be staged on the IFI stand (Hall C7 – stand 025) where the ´Tonda Challenge´ will be assigned. The initiative emphasizes another important moment in Gelato makers´ work, i.e. counter sales, the strategic moment in which clients are met. The best counter staff and cone servers are able to recognize and pamper their clients, showing the various flavours on display, describing ingredients and serving gelato skilfully and correctly. One of the fundamental aspects is the ability to serve gelato in precise quantities using a spatula, an art learned during years behind the counter.

DESIGNING GELATO CONE EVOLUTION
On 21st January, at 2 pm, Rimini Fiera´s Diotallevi Room will host the awards ceremony for the winners of the Design Gelato Cone Evolution contest, organized by the Bruto and Poerio Carpigiani Foundation.
With the participation of the Authorities and international press, the two projects winning the scholarships awarded for designing the gelato cone of the future will be announced.
´Designing Gelato Cone Evolution´, for which London designer Tom Dixon (www.tomdixon.net) and Babbi were the exceptional judges, achieved the ambitious aim of creating an increasingly close bond between the world of design and the gelato world. On the occasion of the 110th anniversary of the creation of the gelato cone by Vittorio Marchioni (1903), numerous young designers wanted to design a ´container´ for gelato with an innovative shape, combining practicality and style.
The 1st prize for the ´creativity´ section consists in a three-week course at the Carpigiani Gelato University (for a value of € 2,500). For the ´industrial feasibility´ section, gelato cone manufacturer Babbi will award a scholarship with a value of 2,500 euros.
www.sigep.it – www.abtechexpo.it