Snacking in Paris: Can Eclairs Please Be the New Macaroons?

Am I allowed to say that I’m just about sick of macaroons, or as too many English-speaking people will insist on saying, macarons? I get it that the modern French kind with their unexpected flavors and gaudy colors have a lot of appeal – and that when someone brilliant like Pierre Hermé has devised them it is time to get on line at the pastry shop. But there are just too many of the damned things around, often from makers who have odd ideas about what constitutes a treat.

So I’m ready for some other kind of pastry that comes in more flavors than I have fingers.
And I’ve found it: the éclair. For some years, pastry chefs have been expanding beyond the classics, with some offering a rotating selection of two or three or four flavors. But a Paris-based pastry man named Christophe Adam has taken the next step: opening shops selling (mostly) éclairs with a wide range of delicious fillings and toppings. On our way back from a fascinating three hours at the Musée Carnavalet, Jackie and I visited his shop in the Marais (there is another in the sixteenth arrondissement), L’Eclair de Génie (literally, a flash of brilliance), where we found about a dozen different éclairs, all charmingly designed and beautifully finished. These represent a rotating selection from a larger repertory, which includes seasonal and other temporary specials.
Out of that dozen, Jackie and I picked four: one that was the favorite of the woman who helped us and three that we wanted. They were:
1. Passion fruit and raspberry (the saleswoman’s favorite);
2. Raspberry glaze and milk-chocolate filling contained in pastry that had been flavored and colored with more raspberry;
3. Chocolate-hazelnut icing topped with perfectly toasted candied hazelnuts (some of them embellished with gold leaf) and hazelnut praliné filling;
and 4. Airy, salty mascarpone-caramel filling and caramel icing topped with silvered crunchies of indeterminate composition.
Design and finish are one thing: the kind of chefs who win competitions can make really boring pastries look like a million dollars. Deliciousness is another matter, and here Mr. Adam proves his worth. Fruit, chocolate and nut flavors were all vivid, contrasting textures (not something that’s often an issue with classic éclairs) were well calculated, and combinations were consistently harmonious, at least in the four éclairs we ate. Here lies the trap: When lesser makers get on the bandwagon (if there is one), the éclair may suffer the same fate as the macaroon, with too many indifferent or weird ones cluttering the shop windows. Yet this may not happen, because unlike macaroons (which, when properly packaged, seem to have a shelf-life measured in weeks) éclairs cannot be kept long once they’ve been made, so speedy sales are crucial: not a good business model for someone who isn’t really committed to excellence.
For the minute, Paris is the only place you can find Mr. Adam’s products (which also include chocolates and other confectionery): there will soon be two more shops there. But Tokyoites and New Yorkers too can look forward to a nearby Eclair de Génie: although dates and sites have not yet been announced there are plans for shops in both those cities. I can hardly wait for the New York shop to open. In the meantime, I will not be making do with macaroons. 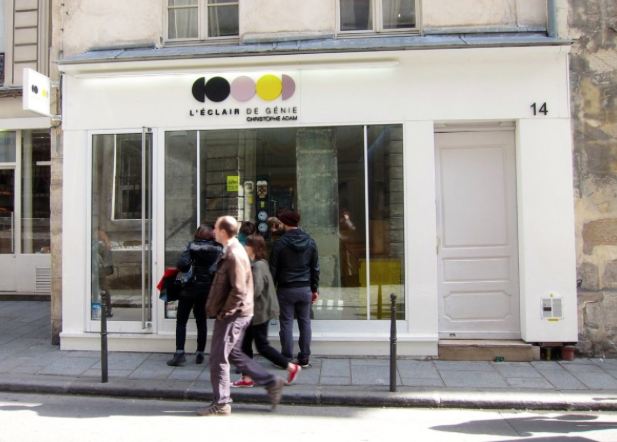