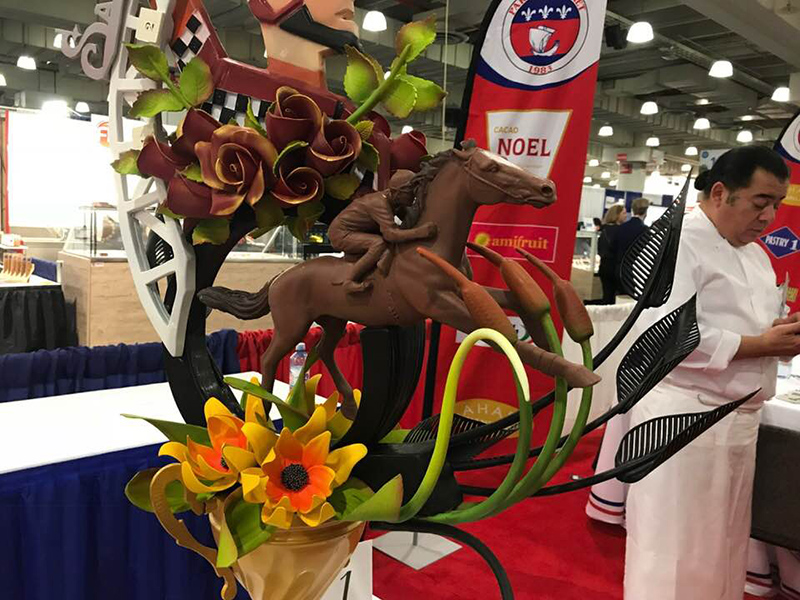 Promoted by Paris Gourmet, the US Pastry Competition in NYcity proclaimed Stephen Sullivan the new Pastry of the Year.

At the beginning of March, in New York, the US Pastry Competition 2018 inspired promising pastry chefs on the theme “The Great Race”. The pastry chefs had to present a showpiece, a plated dessert, and a dessert buffet.
From the Westgate Resorts Las Vegas, the pastry chef Stephen Sullivan won the competition and earned the title of Pastry Chef of the Year. With him, on the podium, there also were Steven Tran, who came in second place, and Courtney Cornier in third place. Alexandra Inkley of Restaurant Daniel won the Honorable Mention prize.
The US Pastry Competition is not new to Sullivan. In fact, the pastry chef already participated as contestant and 10 years later he wanted to repeat the experience.This time, Sullivan has planned and developed all the pieces to be presented in the competition in a whole year with the supervision of the chocolatier Vincent Pilon. And he won!
For his chocolate showpiece, which is dedicated to the horse racing, Sullivan was inspired by Vincent Pilon and Lionel Clement; for the dessert, he was inspired by the pastry chef Johan Martin and the works of Bellouet Conseil chefs, choosing fun colours and great textures. And what about ingredients and flavors? Sullivan counted on classic flavour combinations such as passion fruit, banana and coconut for his fruit desserts, while on chocolate hazelnut, bittersweet chocolate and salted caramel for the chocolate dessert.

The US Pastry Competition is promoted by Paris Gourmet.

The works of Stephen Sullivan.
{AG}news/Sullivan{/AG}

Other pictures of the competition.
{AG}news/US_pastry_competition_2018{/AG}