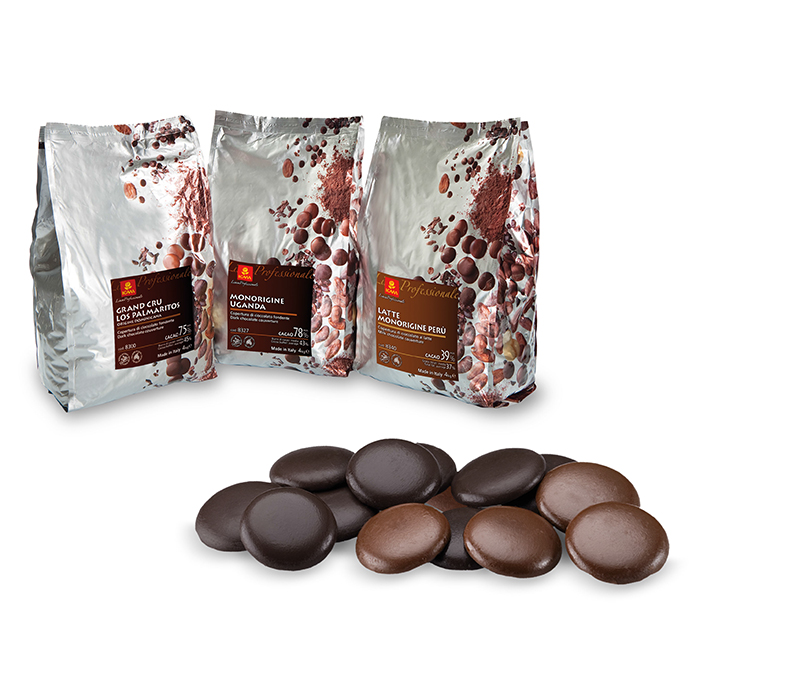 Since the 1970’s, Icam Linea Professionale has selected the very best of the beans grown in those countries traditionally regarded as the cradle of cocoa, where the crop has played a significant role in the economy, history and culture of the local peoples. The result of this long voyage is a premium quality chocolate range which represents varieties of distinctive characteristics which reflect the origin, the individual genotype and the different harvest seasons.
In the faraway lands – Central America, Latin America and West Africa – Icam performs a rigorous and accurate selection of raw materials to identify the finest varieties of cocoa, those best processed in the harvesting and post-harvest operations, possessing superior aroma and taste. This is particularly evident in the two Grand Cru Los Palmaritos and Los Vasquez, both 74% of cocoa, made with cocoa beans from two specific plantations in the Dominican Republic, while the Cru Pachiza – cocoa 70% is the result of a rigorous and accurate selection in the San Martin region, Peru. Next to the Grand Crus there is a wide range of Single Origins Couvertures: Single Origin Dominicana – cocoa 75%, Single Origin Ecuador – cocoa 74%, Single Origin Madagascar – cocoa 71%, Single Origin São Tomé  – cocoa 71%, and the Milk Single Origin Perù – cocoa 39%.
The activities of Icam have been accompanied since the beginning by a deep ethical engagement, translated into important commercial partnerships built on respect, dialog and transparency. To confirm its continuous and constant commitment to the research and the development of higher quality cocoa, Icam brings its wealth of knowledge and experience to the heart of Africa. The result is an excellent cocoa, with an intense yet versatile character that guarantees a distinctive, high quality chocolate: the Dark Chocolate Single Origin Uganda – cocoa 78%, which is excellent in pralines, in combination with ganache creams and fillings that contain significant alcoholic and aromatic parts. In confectionery it is fit for rich, full-bodied and well-structured cream mousses and ganaches. Thanks to its density and intense taste, it expresses itself perfectly in cold desserts: excellent for semifreddo desserts and with chocolate gelato, it can be used in combination with other perfumes and ingredients.

Chocex, the Chocolate Expo in Shanghai