Dieuveil Malonga, Olia Hercules and Alissa Timoshkina, and Koh Seng Choon are the latest Champions of Change 2022 at the The World’s 50 Best Restaurants 2022 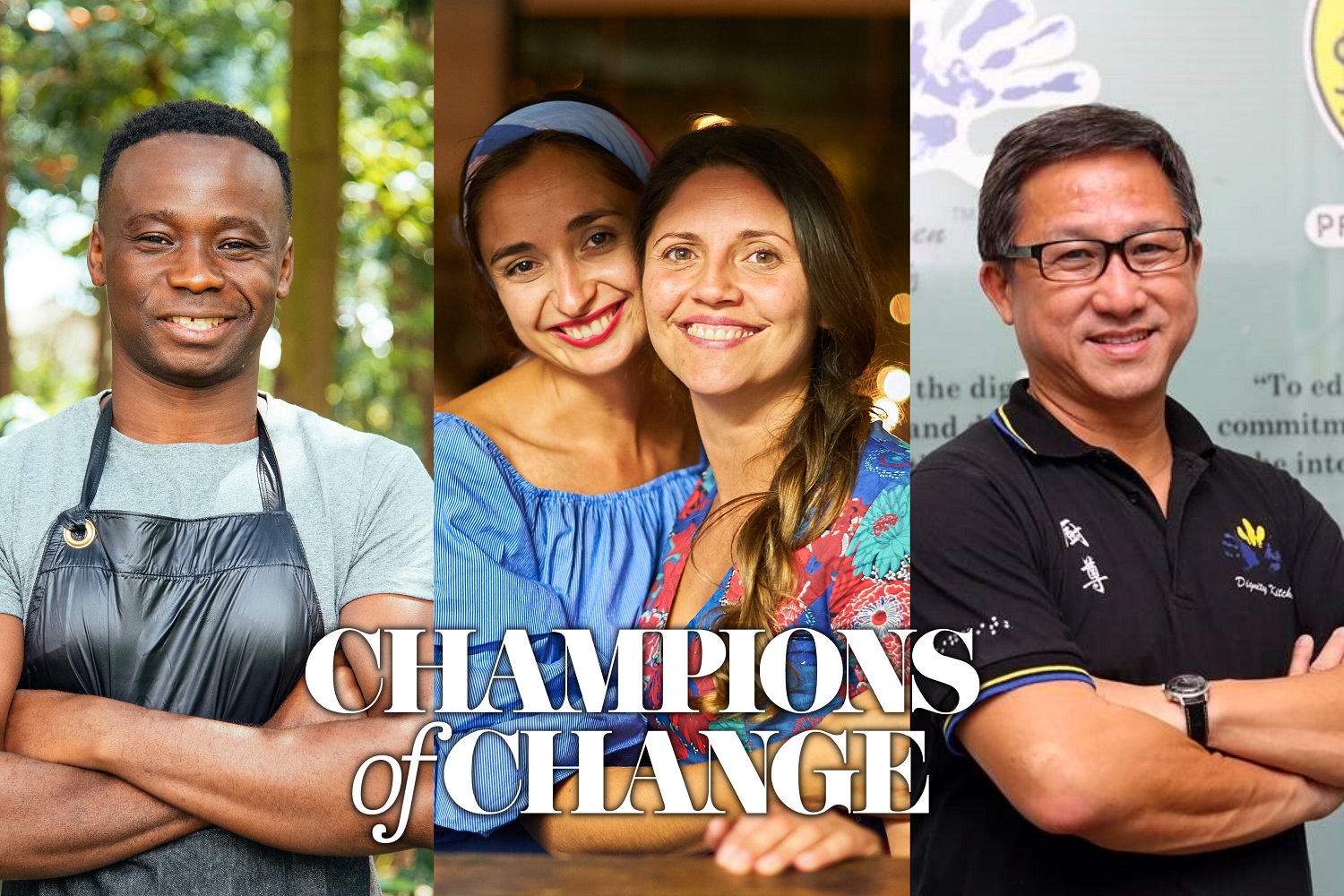 The Champions of Change Award by The World’s 50 Best Restaurants recognises and celebrates unsung heroes of the hospitality sector who are driving meaningful action and creating blueprints for a better world. This year a substantial donation will be made to each of the winner’s causes, allowing the recipients to continue building their initiatives and supporting long-term progress in the restaurant and food sphere. They are DieuveilMalonga, Olia Hercules and Alissa Timoshkina, and Koh Seng Choon, with Chefs in Africa, #CookForUkraine, and Dignity Kitchen projects.

After moving to Germany at the age of 13, Dieuveil Malonga returned to his native Congo in his twenties and was immediately inspired by the young people he met. The budding chef travelled across the continent to research and refine his concept for Afro-fusion cuisine, but what he witnessed during his journey changed the course of his life. Driven by the problems that he saw, Malonga created Chefs in Africa in 2016, a ground-breaking online platform meant to help cooks overcome discrimination and lack of training, employment and equipment, and this network already counts more than 4,000 members.
In 2020, chef Malonga opened his first restaurant, Meza Malonga. At the heart of the eatery there is a culinary training program that every year helps 10 aspiring chefs receiving scholarships, learning essential cooking skills and taking English classes. Now Malong is planning to move his restaurant to Musanze in 2023, where he is already growing sustainable ingredients alongside local farmers and where he wants to expand the training program to 15 cooks per year.

About Olia Hercules and Alissa Timoshkina

Hercules grew up in Kakhova in Ukraine, while Timoshkina hails from Russia. Years later, the pair reconnected when they both switched careers to pursue their dreams of cooking for a living. In 2015, Hercules published an Ukrainian recipes cookbook, while Timoshkina married her passions for cinema and food to create a supper club called KinoVino. When war broke out in Ukraine, in a few weeks they launched #CookForUkraine, a restaurants-powered fundraising initiative for UNICEF. The project increases awareness about the humanitarian crisis and raises money to help children and families displaced by the conflict, while also providing a platform for Ukrainians and supporters to share recipes and the stories behind the dishes. By collaborating with restaurants in London to host special dinners and sell specific menu items to raise funds, #CookForUkraine raised and donated nearly £900,000 in charitable funds in late April. They are currently working on a hospitality-focused workplace scheme for Ukrainian refugees, a cooking school staffed by Ukrainian cooks, and more.

In the first 50 years of his life, Koh Seng Choon was a successful businessman who studied abroad and founded his own management consultancy firm in the Lion City. In 2010, he gave up everything to open the first community food court in Asia managed by people with disabilities. He invested his life savings into the first , which opened in Singapore in 2010, and was later followed by a second location in Hong Kong in 2019. The social entrepreneur is adamant that most of the world look at people with disabilities the wrong way, while focusing on their abilities and creating an innovative program to teach them to be successful hawker stall operators, he positively influenced the lives of hundreds of people and their families. Dignity Kitchen was followed by other plans as part of his Project Dignity organization, such as a food security initiative for the needy and a second-hand book shop managed by people with disabilities and their mothers.

Relaunch and eco-sustainability at the heart of Sirha 2021