THE “PERFECT PROTEIN” TO SAVE THE OCEANS AND FEED THE WORLD 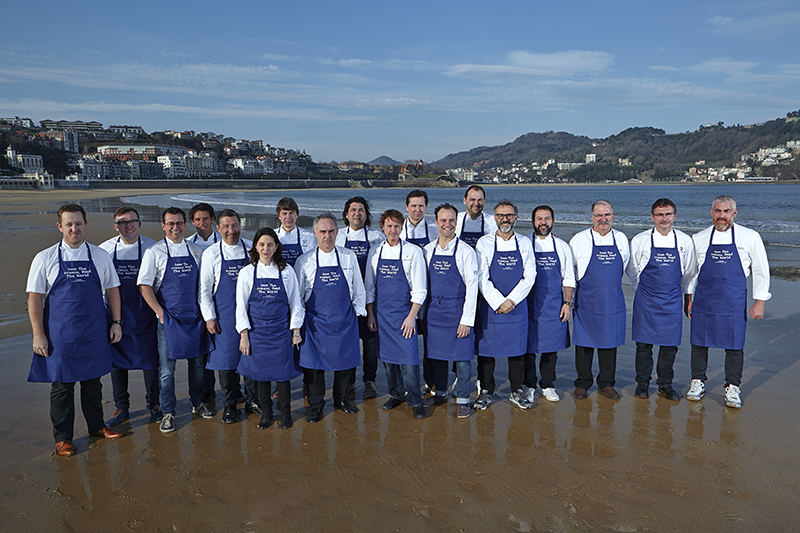 At the first ever gathering of the chefs from 20 of the world’s best restaurants on behalf of ocean conservation,  the chefs pledged to support Oceana’s “Save the Oceans and Feed the World campaign” and committed to serve anchovies and other small fish – like anchovies, sardines and herring – at their restaurants starting on World Oceans Day, June 8 2015. The chefs will cook these small fish to encourage diners to seek out and enjoy this delicious, healthy seafood and to support Oceana’s campaign to save the oceans and feed the world.
This commitment is the result of an unprecedented gathering of the world’s leading chefs in support of ocean conservation which took place in San Sebastian Spain on March 17, 2015 at the Basque Culinary Center.
The Chefs will help Oceana to inspire and empower more consumers and individuals to  get involved in supporting Oceana’s policy campaigns and to help restore the world’s oceans to levels of biodiversity and abundance that can survive on and support a planet forecasted to grow from 7 billion people to 9 billion by 2050.
The chefs who agreed to join the campaign and serve anchovies and other small fish on June 8 at the their restaurants include: Grant Achatz (Alinea, USA); Gastón Acurio (Astrid y Gastón, Peru); Ferran Adrià (el Bulli Foundation, Spain); Andoni Luiz Aduriz (Mugaritz, Spain); Juan Mari and Elena Arzak (Arzak, Spain); Alex Atala (D.O.M., Brazil); Massimo Bottura (Osteria Francescana, Italy); José Luis González (Gallery Vask, Philippines); Brett Graham (The Ledbury, UK); Rodolfo Guzmán (Boragó, Chile); Daniel Humm (Eleven Madison Park, USA); Normand Laprise (Toqué, Canada); Enrique Olvera (Pujol, Mexico); René Redzepi (Noma, Denmark); Heinz Reitbauer (Steirereck, Austria); Joan Roca (El Celler de Can Roca, Spain); Pedro Subijana (Akelare, Spain);  Joachim Wissler (Vendôme, Germany); Ashley Palmer-Watts (Dinner by Heston Blumenthal, UK).

“It is remarkable that so many chefs – who are so busy – came together in support of ocean conservation and to take this joint action together. Most of us already love anchovies and other small fish,” said event co-hosts Aduriz and Roca; “it will be a pleasure to share them with our diners and to help Oceana in its campaign to get more people to enjoy them and to help save the oceans and feed the world.”

The small fish the Chefs pledged to serve  – species like anchovies, sardines, mackerel and herrings – are known as “forage” fish because they play a crucial role in food webs in some of the most productive marine ecosystems in the world. They are the main prey and pathway for energy transfer from creatures with very low trophic levels—plankton—to those with higher trophic levels—predatory fish, birds, and mammals.
Forage fish form massive shoals that are targeted by some of the largest fisheries on earth, but are only rarely seen in restaurant menus. This is because forage fish are mainly used to make fish meal and fish oil to feed farmed fish like salmon as well as chickens, pigs and other livestock. These “reduction” fisheries account for an enormous 37% of all the marine fish caught worldwide according to the United Nations Food and Agriculture Organization (FAO).

“Small fish like anchovies are generally the best fish for you,” commented Patricia Majluf, Oceana’s Vice President for Peru and a leading expert on anchovies and other similar fisheries who spoke at the gathering in San Sebastian.  “They have very high levels of nutrients like Omegas, Vitamin A, Zinc and Calcium and are low in toxins like mercury present in other longer lived, larger fish.”

Lasse Gustavsson, Oceana’s Senior Vice President for Europe, challenged the chefs at the event to serve and highlight forage fish in their menus noting “we ask you to use your leadership in the culinary community to make small fish something we put on our plates and not just in fish meal.”

“The Chefs’ commitment to Oceana to help get people to view small fish as delicious is going to help us save the oceans and feed the world,” added Andy Sharpless, Oceana’s CEO and author of The Perfect Protein. “We can feed tens of millions more people if we simply eat anchovies and other forage fish directly rather than in form of a farmed salmon or other animals raised on fish meal and fish oil. Eating more forage fish – along with scientific management of the world’s fisheries – will enable us to ultimately feed more people from the oceans and to be less reliant on getting our animal protein from livestock in the future. This means we will put less pressure on the planet in the form of demand for fresh water, use of arable land, and emission of climate changing gases.”

Peruvian Anchovies alone account for almost 8 to 10% of all fish – by weight – caught in the oceans. Yet over 90% of all of these anchovies are “reduced” into fishmeal and fish oil.

“We are not using so much wonderful food,” said Gaston Acurio, who signed the pledge and has already been leading a campaign to encourage his fellow Peruvian Chefs to serve anchovies. “I am thrilled to have my good friends signing on in the effort to wake others up to the joy of eating these tasty and nutritious little fish.”

At the historic event – the first time so many leading chefs have come together in support of marine conservation – the chefs viewed the premiere screening of the short film documentary “The Perfect Protein” which is part of this campaign for Oceana – which also includes a website and other actions- designed and directed by the Spanish creative Jorge Martínez.