The return of Identità London 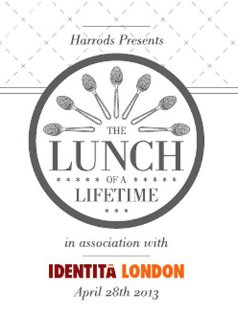 On April 28th, thirteen Italian Michelin stars under one roof for a dreamy lunch at Harrods…

On Sunday 28th April, Harrods will play host to seven of the world’s top Italian chefs, who, when combined, bring a total of 13 Michelin stars to the iconic department store. Massimo Bottura, the brothers Enrico and Roberto Cerea, Carlo Cracco, Gennaro Esposito, Luciano Monosilio and Davide Scabin, will join forces with the renowned Milanese chef’s congress, Identità Golose, to serve the ultimate Italian pranzo in the new edition of Identità London.

Each chef will create a dish for the seven-course lunch, taking place in The Georgian restaurant at Harrods. Brothers Enrico and Roberto Cerea, from three Michelin-starred restaurant Da Vittorio, will together create a salted codfish salad with codfish tripe and smoked potato mousse starter, along with a grand dessert buffet. Massimo Bottura will be serving ‘psychedelic’ veal, one of the signature dish at his three Michelin-starred restaurant, Osteria Francescana – which is ranked number five in The World’s 50 Best Restaurants list.
In addition, the head chef of Ristorante Cracco, Carlo Cracco, will be producing a starter of saffron poached egg with courgettes and mussels, while Davide Scabin, chef proprietor of Combal.Zero, will create a pasta shake. The two restaurants ranked 55th and 59th in The World’s 50 Best Restaurants, respectively. Other dishes that will be served during the lunch are white fish in an aromatic herb crust with a chlorophyll reduction, created by Gennaro Esposito, chef at two Michelin-starred restaurant La Torre del Saracino, and the legendary carbonara of one of Italy’s youngest Michelin-starred chefs, Luciano Monosilio.

The lunch will take place over the course of the afternoon, in typical relaxed, Italian style. The esteemed chefs will cook at individual stations around the dining tables, offering guests the unique opportunity to interact with each one as they perform the finishing touches to the dish before their eyes. Harrods’ trained sommeliers will be on hand to serve Italian wines at the table, each of which has been carefully chosen to complement the lunch. The intimate nature of the lunch allows guests to partake in culinary discussions with the chefs, guided by a top industry figure who will lead Q&A sessions throughout the afternoon. Allowing for a convivial, informal atmosphere, guests will dine on large round tables, each seating up to 10.

Hosting Identità London at Harrods is the latest in a series of culinary events and restaurant launches and cements the department store as one of London’s top dining destinations. Following in the success of The French Laundry pop-up in 2011 and the launches of Galvin Demoiselle Petit Bistro and Bentley’s Sea Grill in 2012, this prestigious lunch will bring some of the world’s top chefs under one roof for one day only. “We are delighted to be bringing this rare culinary event to Harrods, and to welcome these exceptionally talented chefs to London for what is sure to be an unforgettable experience,” says Paul Goodale, director of Restaurants and kitchens at Harrods. www.identitagolose.it