The sweet song of a Tuscan poet 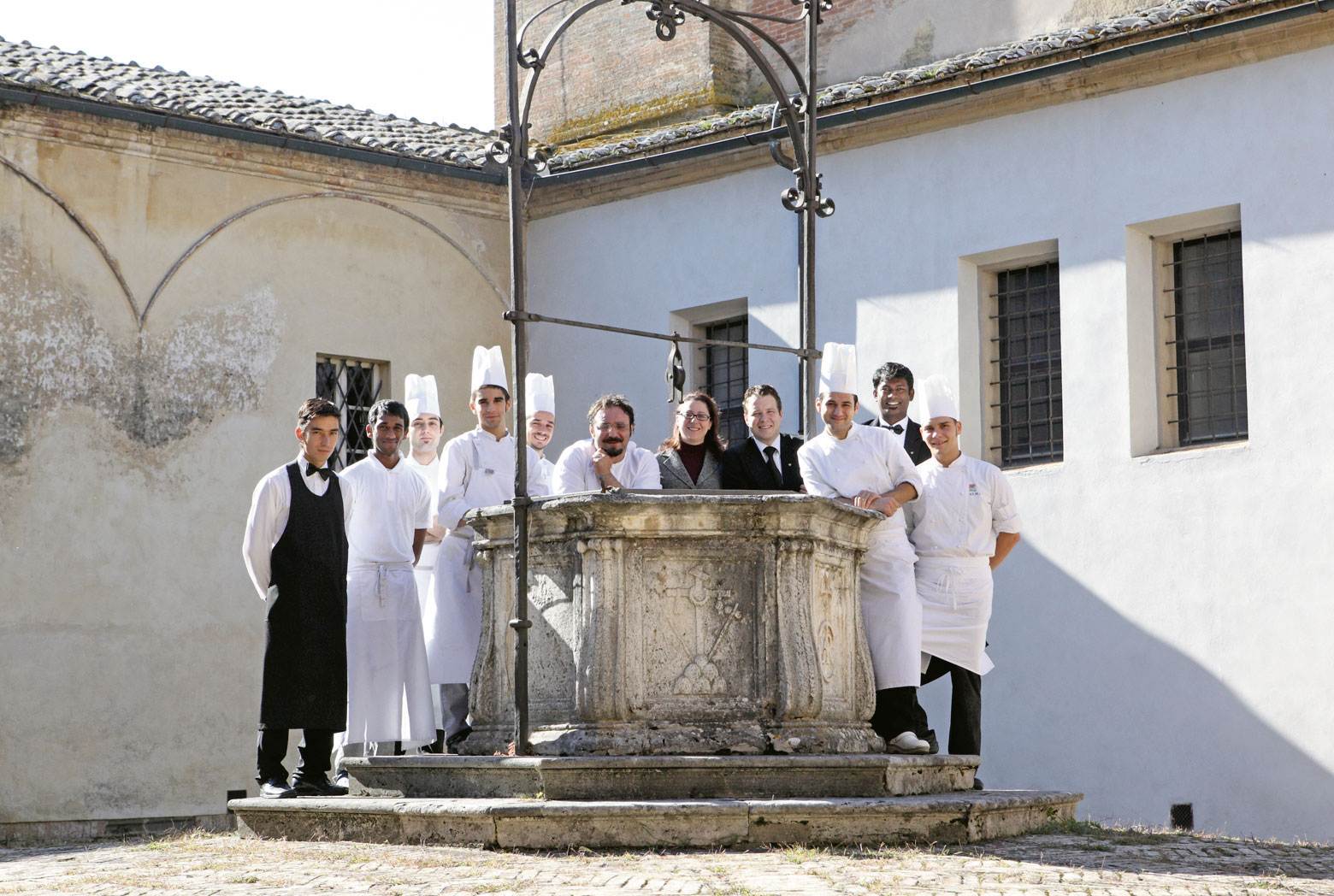 Interview with the chef Paolo Lopriore… 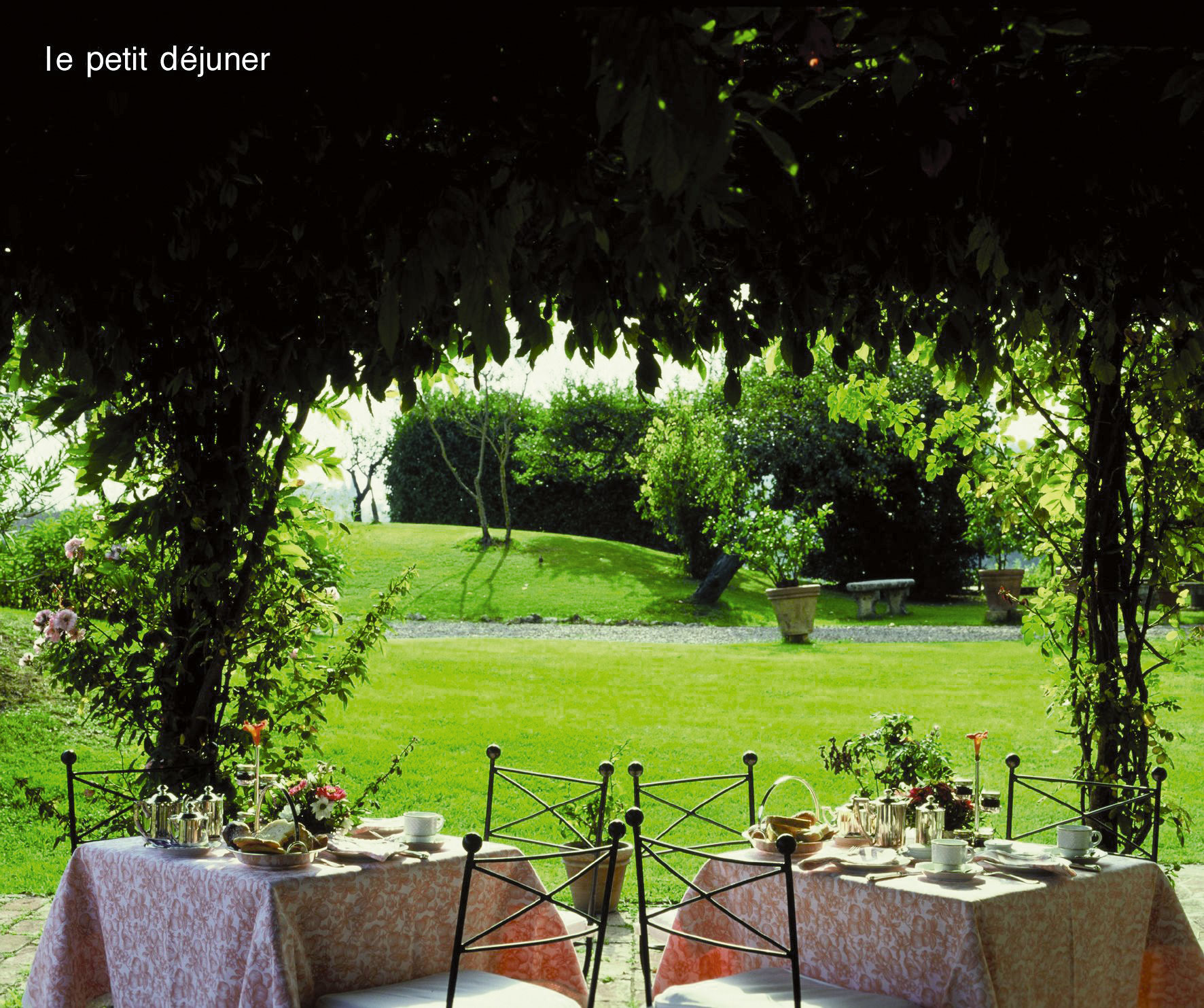 The sweet song of a Tuscan poet

Paolo Lopriore was the chef of “il Canto”, a restaurant inserted in the splendid setting of the Hotel Certosa in Maggiano, in the Sienese countryside

Right in the heart of the Tuscan countryside, a few steps from Siena, rises the majestic Certosa di Maggiano (www.certosadimaggiano.it). Founded in 1314 following the donation of Cardinal Riccardo Petroni to the Certosini as a place of meditation, it was passed down, until 1969, the year in which Anna Grossi Recordati, falling in love with the charm of the monastery, decided to bring it back to its original splendour, firstly renovating it as a private home and then in 1978, turning it into Hotel Relais and Châteaux. Only later on did her daughter, Anna Claudia Grossi, who today manages the structure, give life to a project for haute cuisine, creating “il Canto”, and wanting the young chef Paolo Lopriore by her side. Student of Gualtiero Marchesi, having gained a lot of experience in Italy, such as at the Enoteca Pinchiorri in Florence, at Ledoyen and also at the Maison Troisgros with Michel Portos in France, at the Bagatelle in Oslo with Eyvind Hellstrom, Lopriore is in tune with the place and its atmosphere. It is almost as if “il Canto” was waiting just for him. He is said to be shy and reserved, perhaps this is true or perhaps he is not fond of public celebrations. One thing is certain; he possesses a kindness and helpfulness of other times. He is a concentration of personality and delicacy which allows him to follow his path, without looking back and without being overcome by the world outside the Certosa. His, is a cuisine of contrasts, here, the discordant element serves as a stimulus for the diner, who allows himself to be transported in a sensory experience without confines. It is a painstaking work to arrive at the roots of flavours, enhancing them in order to bring the primal aspect to light.

If you have to represent yourself in a dish, what would you choose?

Algae salad with aromatic herbs and roots. This is a dish which represents us and which encloses a great lightness given by the salad where each leaf has its own sensation (bitter, acid, spicy) and where there is no condiment. I am not fond of “filling out” my dishes, making them gluttonous, I prefer that raw materials maintain their energy and essence. A good idea of this is something we did with green beans, after having blending them, and leaving the pulp in a glass jar for one night, we divide the pulp, which we keep for the dish, from the watery part, which we throw away. The pulp of green beans is used as it is, pure, served with boiled cuttlefish and raw almonds. I like to make a hit with the product because it is its many faces that interest me, not only its goodness.

How would you define your cuisine?

I live it daily, with all its changes, even temporary ones. You stop, you start again, you look back, you analyse. It is difficult to define in a few words. I can only say that it is mine!

What is intelligence in cooking?

The synergy of action and thought at the service of the raw material which allows us to accept and respect the same. It is that which helps us to find the solution in a second. The right timing so that what is being handled does not suffer, the right match between two flavours, because first there is respect for the product, moving this same awareness and attention to the customer. It is from this concept that the menu “Oggi” (today) was created.

Only dishes of the day, what is delivered, what I buy and feel like making. It is a sort of ritual which allows us to have a greater respect for the food. Vegetables, for example, are cooked there and then so that they maintain their energy. The menu has 9 courses, even if we would like to reduce it to 5 or 6, not so much for the work required, but for the customers. I think that the guest cannot and must not be dazed, indeed it is important that they have the right amount of stimulus and the right amount of time to savour. Often the selfishness of the chef leaves little space for the diner. The desire to leave the menu incomplete comes from this premise, so that it can be completed the next time.

Your dishes are often pure art which is transformed into gastronomic ideas: How do you create them?

We look for the golden mean for the ingredient and everything takes shape based on the structure of the dish. It starts from the element on which you mainly want the customer to linger on and you work deciding on how this must interact with the palate.

For example, think of our tomato ravioli, where we put the filling in gelatin and serve quite liquid. What is missing is the olfactory perception which is released only when they are placed in the mouth. Also with spirits, by putting them in the siphon bottle, we have obtained a good result. Instead of drinking them, we eat them, giving them lightness. There is not an overall recipe, everything is built based on the sensations of the dish.

A result of creativity or a project?

An accurate project also because creativity is subjective. Whoever observes my cuisine can define it creative or classic, depending on the level of perception. I prefer to talk about personality, which is what identifies the person and their works.

How is a menu created at “il Canto”?

Here I must thank Mr.Marchesi who taught me how to create a menu. There is a classic base which starts with starters, pasta courses, main courses…, but then the perceptions of taste come into play. I remember his exact words, “Think of serving Crescenza after gorgonzola”. This idea, even if bizarre, envelops a great philosophy, because eating something fresh after something with a savoury or spicy taste allows you to perceive in a different way. This is the point from which we start and following this theory comes the choice to serve a risotto as the last course within a light menu, to which we needed to give substance.

What do you mean by light?

Without dressing, pure flavours that we place on the plate. The lightness is in the absence of fatty substances, making the recipe sweet. So it is with the rice, which we have made lighter by eliminating a part of the butter in favour of rice flour, used to stimulate creaming. Also the bread, that we bake daily (there are two types of large loaves, one white and the other brown, bread rolls with oil, butter and lard, plus bread sticks) is only served with the main course, as an accompaniment. The bread sticks are given a leading role with the starters and pasta courses: they are appetizing, less demanding, crunchy and functional, insomuch as they are useful instruments for eating the food. Perhaps it is the necessity to narrate oneself in a different way which brings these gestures to arrive in a different way.

Can you describe some of the dishes on this menu?

The “mucillagine di crescione” (watercress mucilage) is prepared by soaking the seeds, served with spinach leaves dressed with two drops of extra virgin olive oil (for the shine), a lemon flower, a spoonful of (5 g) caviar, a solution of salt and sugar (marinade of Norwegian fish), some yogurt and dill. Or, “tè bianco al gelsomino” (white tea with jasmine) which we place in the soda dispenser to give volume, with a Moscato di Pantelleria vinegar jelly and two sea truffle. I love things that are raw and cold, a compromise which is often found in my dishes.

Moving on to the sweet aspect of your cuisine: Are there any parts in common between cooking and confectionery?

Yes, lots, especially since because, here at “il Canto”, we do not have a confectioner, it is we chefs who prepare the sweets, with less technique and more liberty we try to transmit the same concepts.

And the dessert menu?

At the moment we do not have a menu, and the customers can choose between chocolate with grapefruit and saffron, passion fruit meringue, coffee and lemon pastry and a liquorice and wild fennel semifreddo with smoked sugar.

What is it that characterizes a dessert?

It is the joy of the dinner guest the moment when the meal draws to a close but it must not be the instrument that wins over the customer. The dessert should enclose freshness, not stultify the palate which has already been proven by the previous course and newly stimulate it. This means a less demanding dessert, fresh and not cloying. We favour compositions, with elements that at the most reach 60°C when they are incorporated in the dessert. Also the small confectionery, which is not proposed as a mini dessert, follows these lines, with gelato covered with chocolate, which can mean white chocolate with tarragon; chocolate 100% and Fisherman; raspberries with chocolate 70%; burrata cheese, black cherry with milk chocolate.

You live in a town which is steeped in tradition, however your cuisine is not strictly tied to the territory: why?

It depends on what is meant by territory. I do my shopping around Siena but it is the interpretation given to the ingredient that modifies the conception of “territory”. For example, the algae salad which was invented thanks to the herbs that we have here growing around the Certosa (rue, wild fennel, sorrel). The honesty of the territory is found in offering that which it makes available. I do not want to fall into the routine of tradition. I have a great respect for it but what makes the difference is my interpretation.

What is your greatest satisfaction?

Having created this group with Anna Claudia, who is always present, Michele in the dining room and Gianluca in the kitchen, with whom I share ideas and passion, because it is wonderful to transmit experience and knowledge to people who want to learn. It allows us to grow and do interesting things, such as working with wine. We offer vintage wine (Chianti, Brunello…) trying to have in our wine list only those wines that we like, consistent with what we cook. 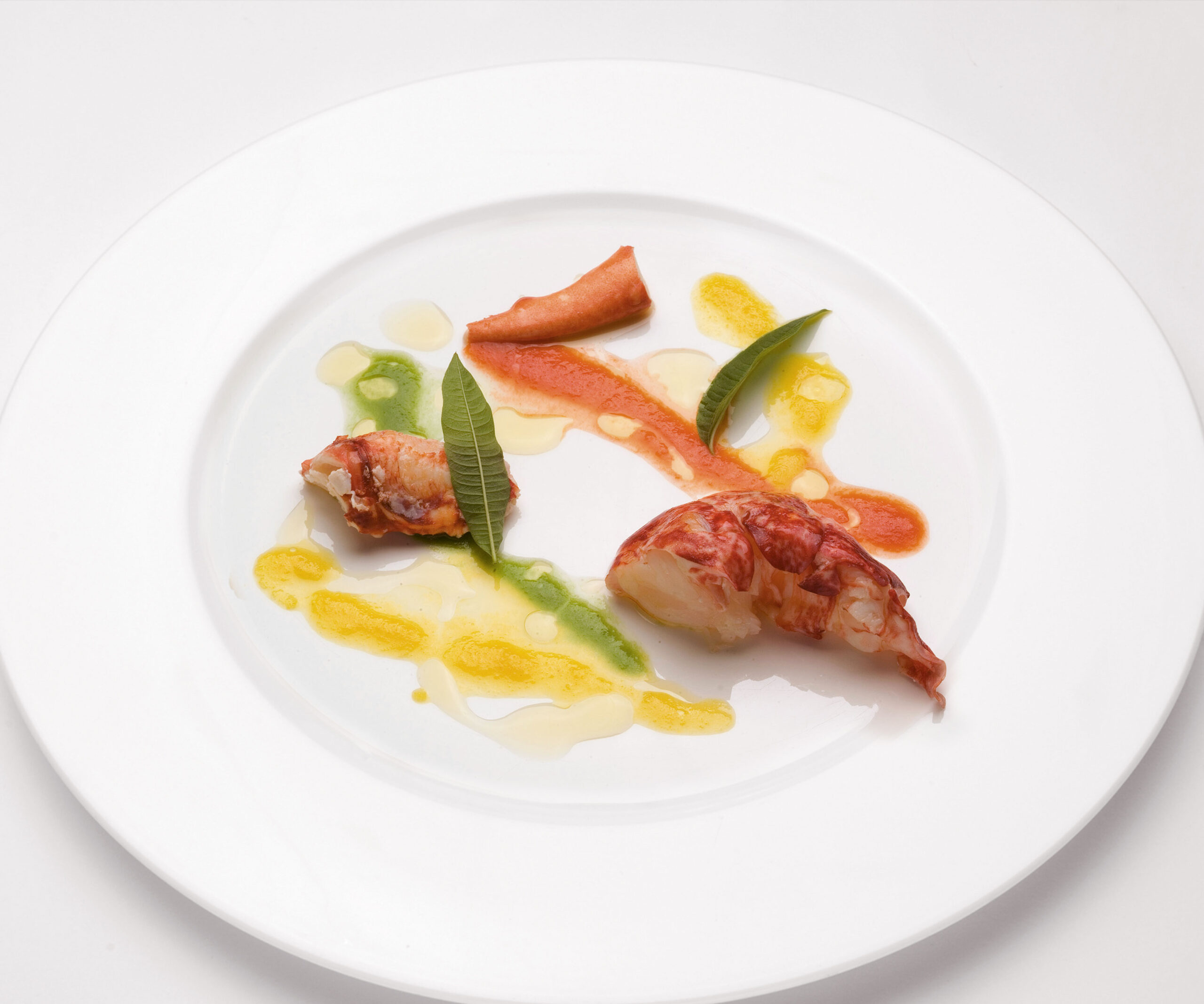 Boil the lobster in plenty of water for 3-4 minutes, leave it to cool at room temperature, remove the shell and place the meat in the fridge, after having divided it into 12 equal parts.

Blend the peppers separately and leave to rest for about 5 hours. In three pans, Fry the garlic in the oil, add the blended peppers after removing the excess liquid and bind each one with ½ coffee spoon of agar agar. Add sugar as required to the sauce with red pepper, a spoon of vinegar to the yellow pepper and leave the green pepper natural, always seasoning to taste. Arrange the three sauces on the slightly warmed dish and place the pieces of lobster, which have been previously warmed through in oil in a pan, on top.