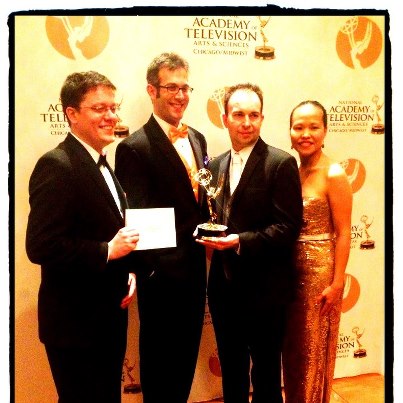 The Chicago Pastry Competition won the Emmy for their first web series that was released earlier this year! The Executive Producers JMPurePastry and Bitter Jester Creative from Chicago, USA have been nominated in the category of ‘Best Live Event (edited)’. Results have been announced at the 54th Annual Emmy Awards at Alhambra Palace, on November the 18th.

The videos have already won two Communicator Awards, two Hermes Awards, and a W3 Award for excellence in video content and production. The group has just completed filming the second season of The Chicago Restaurant Pastry Competition, which this year features four top restaurant pasty chefs from all over the United States.

Executive Pastry Chef Jimmy MacMillan was especially enthusiastic about this year’s competition. “We were able to grow this year in many ways- visually how we represent the desserts as well as superior pastry content throughout. The results will be a fun, vivid, and very dynamic pastry program”. The husband and wife team of Julie and Jimmy MacMillan started the competition in cooperation with The Chicago School of Mold Making in Chicago, where the event takes place.

“We wanted to show the professional side of restaurant pastry- we wanted to tell that story”, explains Julie MacMillan. “There are so many brilliant pastry chefs working today that don’t get the attention they deserve. This competition looks for the best and brightest and broadcasts them to the largest audience possible.” JMPurePastry brought in Nicolas De Grazia and Daniel Kullman from the award winning Bitter Jester Creative video production company to help tell the story. “Working in a pastry kitchen requires a tremendous amount of concentration, attention to detail, and a constant refinement of the product. These conditions make for a naturally compelling film production”, says director DeGrazia. “It’s fully immersive and it keeps you on your toes, and it’s one of the most delicious productions we’ve ever had the privilege of being a part of!” Season two’s first video will be released in December in the form of a trailer, with episodes being released every month.