Wonderful Italy. Lorenzo Puca, Andrea Restuccia, Massimo Pica, and the president of the Italian Club, Alessandro Dalmasso, are the new winners of the World Pastry Cup

Theirs are the third gold medals won by an Italian team at the most prestigious pastry competition in the world, which rewards the four great professionals, a cohesive and empathetic work group, and our Made in Italy pastry art 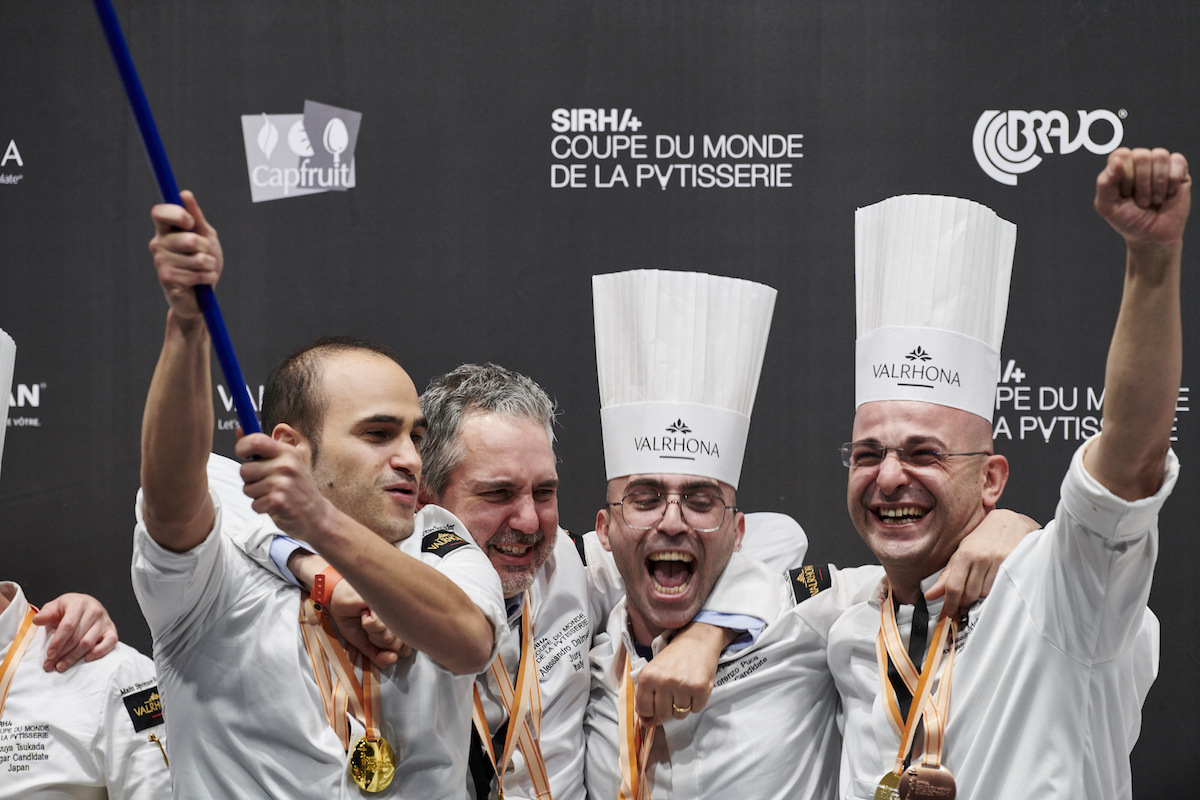 Italy won the Coupe du Monde de la Pâtisserie. For the third time in the history of this world competition, the Azzurri walked up to the top step of the podium. An indescribable emotion filled the Sirha arena in Lyon immersed in the choirs of many fans. Tears and enthusiasm. Because it was a special victory, with the French équipe joining the event for the first time after many years. The first time after a complex period for everyone. The first time with a new president, Pierre Hermé, who succeeded the founder (in 1989), the legendary Gabriel Paillasson.
A new victory in this magical year for Italy, with the European football and volleyball championships won by our men and women national teams, Berrettini at the Wimbledon final and the Maneskins at Eurovision. And Maneskins’ “Zitti e Buoni” was the song chosen by Team Italy as the soundtrack of their demanding and complicated training, which lasted many more months than expected, given that the CMP was postponed twice. A deserved and intensely experienced victory in every moment – before, during and after – made even more incredible by the final results, with Japan in second place and France third, while the special sustainability prize was awarded to Switzerland, and the team spirit prize to Chile.
The Coupe has always held a special place in Italy’s blood and heart: 12 participations and a double World Champion title until now, with the third victory by Lorenzo Puca, Andrea Restuccia and Massimo Pica, with president of the  Club della Coupe du Monde de la Pâtisserie – Selezione Italia, Alessandro Dalmasso. They were supported by the three 2015 champions, Emmanuele Forcone, Francesco Boccia and Fabrizio Donatone, and by the Club itself that, since 2000, has been committed with professionalism and a lot of voluntary work to support the teams. A cohesive work group which includes Vittorio Santoro, director of Cast Alimenti school, the secretary Paola Cristini, the Pr manager Livia Chiriotti, Drg Comunicazione  press office, and Cast Alimenti students (such as Matteo and Lorenzo Marchisio and Dejana Scisciani), who supported the team day and night. And last but not least, all the precious sponsors that gave life to this “Italian dessert system”.

The key to success (which filled not only the Arena, but also the web and the social networks) was obviously the team itself. Two thirds of its members were the ones who had won the bronze medal in 2019. The captain was again Lorenzo Puca, 32, a specialist in sugar art; the 28-year-old previous ice sculptor Andrea Restuccia, who had to show his talent as a pastry chef this time (because of the elimination of the ice sculpture competition from the new CMP regulation), with the addition of Massimo Pica, 36, the new candidate for chocolate. They had ten hours to make the chocolate dessert, the iced entremets, the restaurant dessert, a sugar sculpture and a chocolate pièce.
Eleven teams reached the highest step of the podium through time, which was conquered by Malaysia in 2019 with direct access the 2023 edition, according to the rules. Satisfaction and great emotion were expressed by Alessandro Dalmasso: “Our boys did their job perfectly, practicing everything they trained for, with the special mix of love for their profession, tenacity, and team harmony that they showed in Lyon. An incredible job, that went beyond all expectations. A magic that has been going on for many years, a sign that the group is cohesive and works well”.

Among the 2021 novelties, the restaurant dessert replaced the plated dessert and a special commission was set up to judge this category. Another reason of Italian pride, the three-starred La Pergola restaurant pastry chef Giuseppe Amato was chosen to be a member of it, with other world-renowned colleagues such as Sébastien Vauxion, BrandonDehan, Jordi Roca, Eunji Lee, Glenn Viel, Sang Hoon Degeimbre and DominiqueCrenn. “My participation as a member of this special jury was an honor – he said – and I’m happy that the importance of restaurant desserts has been understood, showing how crucial the profession of pastry chef in restaurants is”. A central role codified in his book “La Pasticceria da Ristorazione Contemporanea” (Chiriotti Editori).
In this edition a particular attention was also paid to a responsible and ecological approach to work, including the banishment of additives such as dyes, glitter powders and titanium dioxide.

Alessandro Dalmasso, who is also the author of the book “La Grande Piccola Pasticceria” (Chiriotti Editori), makes a further comment: “We feared that the Coupe could be a toned down event, but it was instead great, with all the top players at stake. A high level competition in spite of pandemics, whose participants worked hard to achieve the best results. Our three Italians gave their best, proving to be a close-knit, professional team who knew how to work from the heart, as many jurors highlighted. We won and this is an immense joy: we made history! ”.
The Italian dessert was assembled on multiple layers, starting with a vanilla and orange flavored short crust pastry base enriched with chocolate custard and a sponge cake, vanilla diplomatic cream, orange-scented exotic jelly and a chocolate diplomatica with dripping sauce. The gelato entremets was composed like a matryoshka, including strawberry and raspberry jelly, semifreddo with mascarpone and raspberry, almonds and passion fruit. The technical innovation consisted in the internal cylinder, obtained with a meringue donut and an exotic compote to divide the sorbet. The dessert was completed with almond, vanilla and lime gelato and a base of sponge cake with pistachio, raspberry and almonds. Lastly, the restaurant dessert was inspired by the world of bees, which were chosen as the protagonists of the artistic pièce. Nature was indeed a central theme of this edition, as the choice of Patrick Roger as honorary president of the CMP further proves, since he is a chocolate sculptor who often addresses nature and animals as sources of creative inspiration.

A special focus was on sustainability: “This event is the point of reference for anyone who is committed and responsible in pastry-making, at the service of a strong love for food, the bearer of emotions. The world of pastry also plays a fundamental role, but it must retain its essence: taste, pleasure and love for good food, through a better action supporting environment issues and the planet”, said Hermé. At the party organized at the end of the awards ceremony, Team Italy deservedly “pampered” the prestigious CMP trophy, whose female silhouette symbolizes the transformation of the four elements, through the creative act of the pastry chef.
In the next issues of “Pasticceria Internazionale” we will publish all the insights, but we wanted to tell you immediately about this incredible emotion, almost still incredulous for this crazy undertaking, lived together with the team and the Club, so as to celebrate these high skilled professionals and even more their humanity!