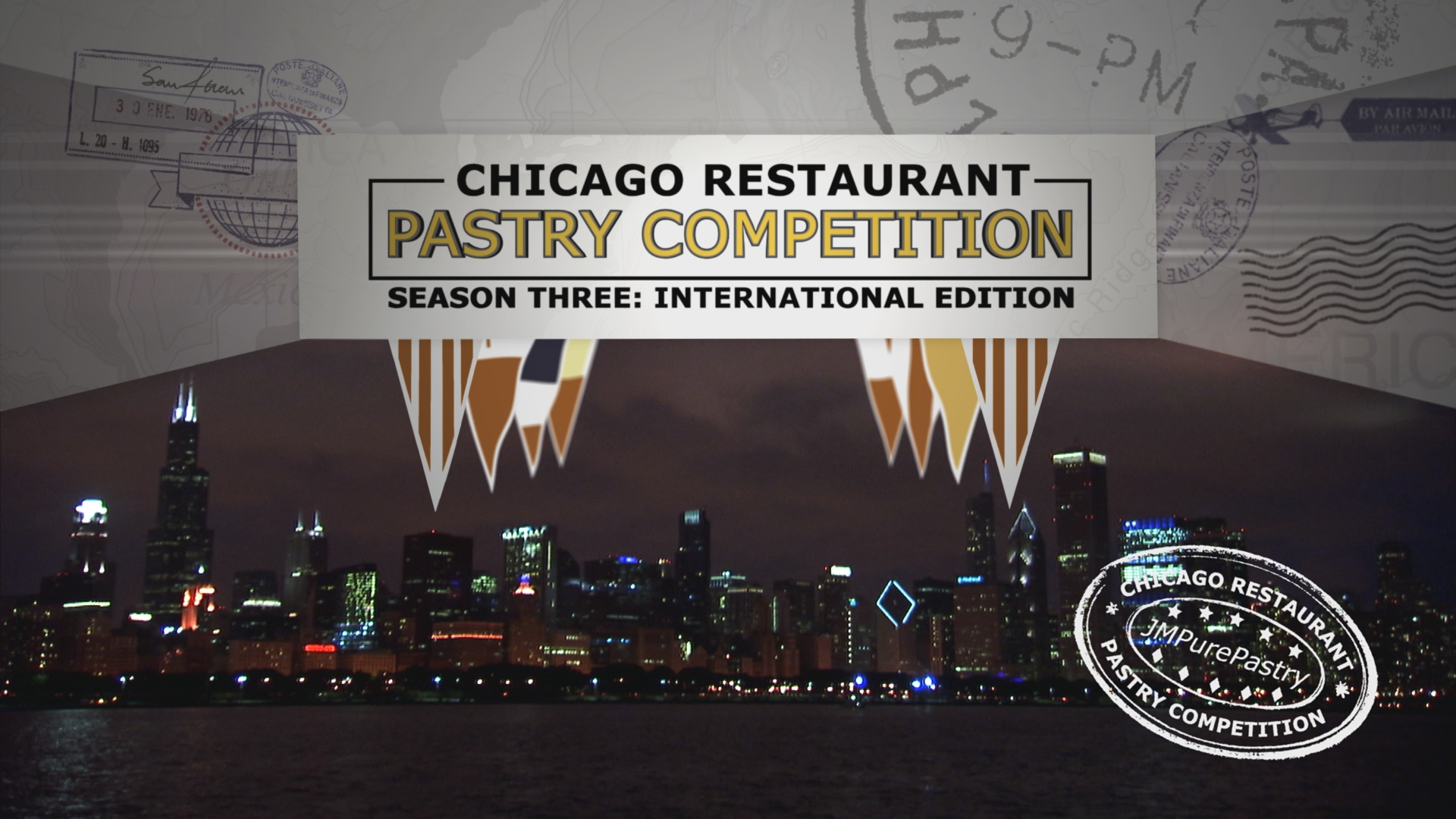 Chicago has certainly come to prominence in the national food scene, so it seems appropriate that top chefs in the windy city are contributing to the future of pastry competitions. The Chicago Restaurant Pastry Competition just wrapped its third season, filming the competition at The Chicago School of Mold Making. The Chef Finalists that chosen in a blind selection process are: Michaela Hapak from Splendido Restaurant in Toronto, Canada; Jim Hutchison from Winvian Relais & Chateaux of Morris, Connecticut; Sean Pera, The Umstead Hotel & Spa, Cary, North Carolina and runner up and first time repeat competitor Meg Galus from NoMi Restaurant at the Park Hyatt Chicago.

“Season 3 was great- the bar has been seriously raised.” says Chef Jimmy MacMillan. Chef MacMillan is half of the team that facilitates the competition, JMPurePastry LLC. His partner, wife Julie MacMillan, also prepares the Chef and Judges dinner; a sit down authentic Thai feast that sets the tone for the entire competition weekend. “We wanted to show hospitality and respect to the chefs, judges and sponsors. Too often chefs travel to compete and aren’t treated with the respect they deserve. We wanted to feed them and make them comfortable so they can excel on competition day.” explains Julie MacMillan.

The Chefs arrived at the school on Saturday afternoon to load-in. Before they unpack they must participate in the Drawing of Advantages, a blind draw of folded paper that designates which station a chef will work at, when they will start and the order they will pick ingredients and plates for the three challenges. This year Chef MacMillan added a new challenge: Artisan Gelato Milkshake. “We want the Chef Finalists to redefine milkshakes; to show us what a milkshake might look like if they created one in their shop for a visiting friend.” Following the tradition from Season One, there is also a Mystery Challenge- this year involving a 4” Sphere Mold that they must fill with various desserts items and judged on its textures and flavors. They must use premium ingredients sponsored by PreGel America, Nielsen-Massey, Wholesome Sweeteners and DeZaan Gourmet in the first two challenges.

The third and last challenge of Competition Day will be their Signature Plated Dessert. No limits are placed on this dessert and they may use any ingredients they wish. They only curve ball is they haven’t seen which Steelite plates have been selected for the competition, and may need to adapt their dessert depending on which plate they pick. As in the above ingredient selection, once a chef picks a plate it is off the table for the rest of the group. The kitchen is flush with equipment from Waring Commercial, ABS/Taylor, Irinox and Eloma. They are given bus tubs of iSi spatulas, chinois, whisks and other hand tools.

Chef MacMillan describes the difference, “Instead of finding out how well a chef can perform under the most difficult situation, we want to document how well a chef can perform given as many advantages as possible. We have our ingredient partners send the finalists products to their shops so they are familiar with them when they come to Chicago to compete.” Chef MacMillan is a newly minted Top Ten Pastry Chef in America and was joined this year by fellow Top Ten Chefs, Will Goldfarb and Antonio Bachour. Chicago’s most pedigreed young chef, Curtis Duffy, joins the chefs as they score the Chefs on everything from taste, to design, use of ingredients and narrative. While the new format if fresh and enticing, the only attendees are the sponsors, the Brands of Distinction and Premium Brands that support the competition with cash and product donations. The rest of us must wait until December 2013 for the Trailer and January for the first episode in the four part mini series that releases its finale in April 2014. Michael Joy, Principal of the Chicago School of Mold Making and Master Mold Maker was an early collaborator in the competition. “What Jimmy MacMillan and JMPurePastry are doing is several steps ahead of everyone else.” says Mr. Joy, “Their vision of utilizing media to tell a chef’s story is inspiring the industry”.

As of this printing, Season Two of The Chicago Restaurant Pastry Competition has received Four Emmy Nominations. “We’re invigorated by the positive response from the chefs, sponsors and industry leaders. It’s a ton of hard work to co-ordinate, but the results are incredible”, reflects Chef Jimmy MacMillan, “now we’re headed into the three month edit of Season Three!”.  www.JMPurePastry.com 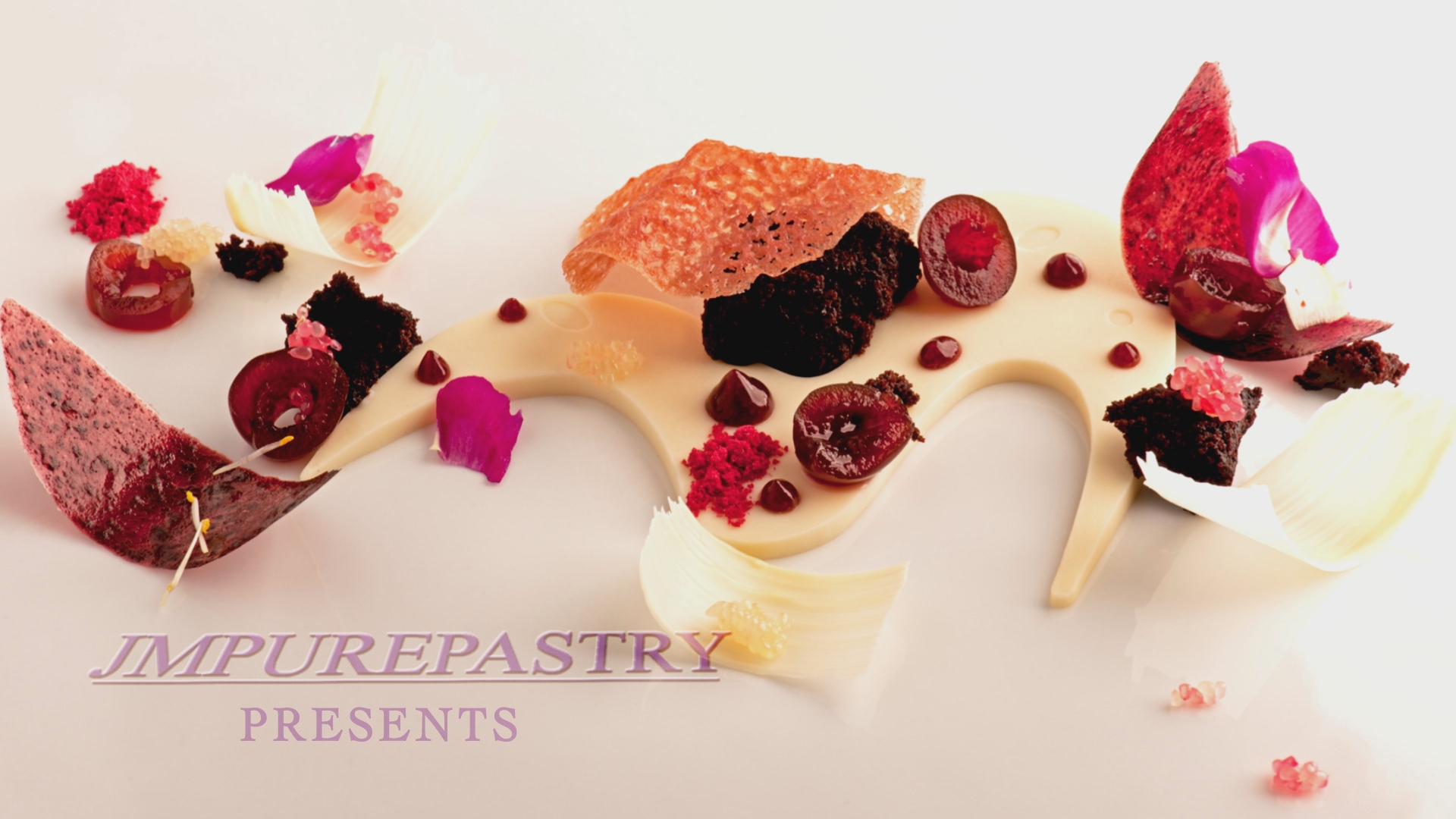